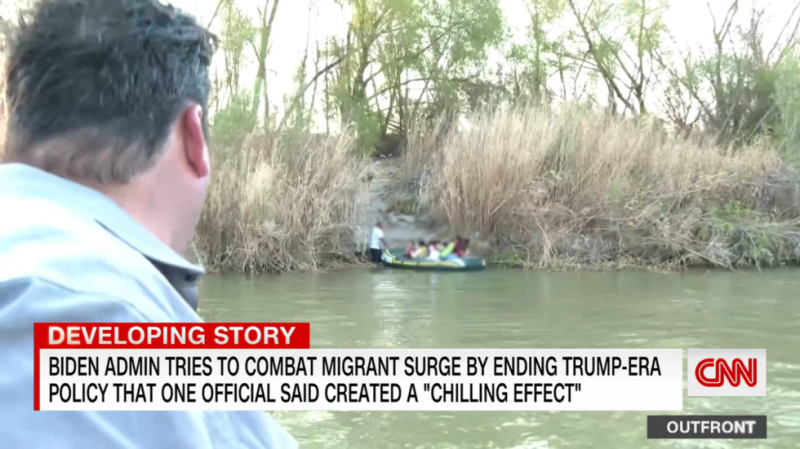 About a week ago, CNN aired a report on the migration situation at the US’ southern border. A large chunk of the piece was dedicated to dozens of people who were crossing the Rio Grande into Texas just as the TV crew was passing by on a motor boat, seizing the chance to film them.

The video drew the attention of the American Prospect, a progressive liberal outlet, which said there may be something fishy about it. It suggested that the CNN crew was duped into filming an event staged by advocates of stricter border control, and that the US Border Patrol may have been in on the ruse.

The publication put forward a number of arguments to make its case. Videos of the same event, or one very similar, are available online and were widely covered by outlets skeptical of migration. The person conducting boat trips across the river was wearing a face mask and distinctive fatigues – indicating he knew he would be filmed and was not afraid to be caught, since he made no attempt to blend in with the passengers. The crossing allegedly happened in a location only accessible to the Border Patrol, and took too long for a genuine operation conducted by somebody avoiding law enforcement. The list goes on.

The suspected deception, seemingly an embarrassing one for CNN, was picked up on by right-wing outlets like Fox News and went viral. An apparent attempt at damage control came in the form of the latest issue of ‘Reliable Sources’, CNN’s newsletter, which lamented that “there is simply too much disinfo and misinfo promoted by bad-faith actors and others to keep tabs on.”

The newsletter called The American Prospect “a progressive website,” assured that “obviously, CNN did not stage the crossing,” and cited a statement by “Customs and Border Patrol” categorically denying involvement in any sort of a staged photo op. The outlet is a printed magazine with over three decades of publishing history, though it does host current news on its website. It also had not accused CNN of staging anything. And the law enforcement body cited by the newsletter is called United States Border Patrol (USBP), which is part of the United States Customs and Border Protection (CBP).

Considering the inaccuracies and a failure to address the core of the issue, it’s no surprise that David Dayen, the executive editor of the American Prospect, unleashed a furious rebuke of CNN and its writer, Oliver Darcy, who penned the sloppy ‘Reliable Sources’ issue.

In a Twitter thread, Dayen pointed out that the Border Patrol’s statement may not be truthful and thus was not valid evidence. He also outlined other problematic parts of the attempt to fact-check the “misinfo,” and said the newsletter even failed to accurately quote the response he gave them about the claim he had published.

“We’re going to have more on this in a followup,” Dayen promised. “But it is so sleazy of @CNN to duck us for a week, then have their ‘media’ ‘reporter’ run a BS story that lumps us in with conspiracy theorists. With the ‘evidence’ that an untrustworthy agency said so.”