Home / WORLD / CNN’s Chris Cuomo dodges questions about ex-governor brother, but don’t worry – his colleague Stelter is there to spin it for him

CNN’s Chris Cuomo dodges questions about ex-governor brother, but don’t worry – his colleague Stelter is there to spin it for him 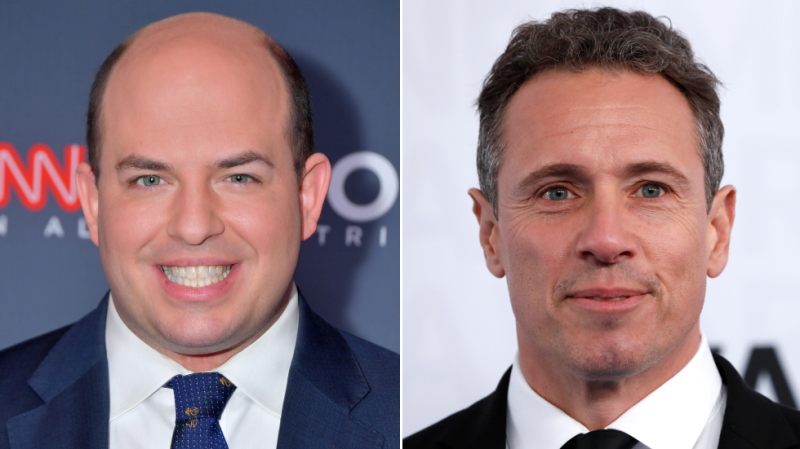 Stelter has been front and center this week defending CNN from heavy criticism surrounding its coverage of Andrew Cuomo, who has resigned from his position as governor of New York amidst numerous accusations of sexual misconduct.

Cuomo was a regular on his brother Chris’ CNN show where he often conducted puff-piece style interviews on the pandemic in New York and mostly avoided addressing numerous controversies swirling around his administration. Those include accusations he’d had staff voluntarily work on his book about “leadership” during the pandemic and that Covid-19 nursing home deaths had not been properly reported in an effort to keep the death toll in the state low.

CNN released a statement in May condemning the fact that Cuomo had been advising his brother on how to respond to accusations, something critics have rightly pointed to as a major ethical problem for the network. Chris Cuomo is currently on vacation, something the CNN claims was preplanned.

During a Tuesday appearance on Stephen Colbert’s ‘The Late Show’, Stelter defended Chris Cuomo to Colbert, who joked the host has no ethical boundaries in his reporting.

“I think he does, actually,” Stelter said. “I think Chris does, I don’t know about the governor.”

Stelter went on to call the situation with Cuomo “really complicated” and claimed there was “no page” in the “journalism ethics playbook” that applied to the Cuomo situation.

“It is an odd conflict,” Stelter said, “but I don’t think – if we open up the journalism ethics book, there’s no page for this. The craziest set of circumstances that you can imagine, right? A governor and a brother, both in these high-profile jobs. This is definitely awkward for CNN, though.”

The ‘Reliable Sources’ host claimed there are a variety of opinions about Cuomo at CNN, but there is no “perfect solution” anyone can agree on.

His remarks have resulted in him facing a scolding from many who see the issue as a cut-and-dry one.

Stelter had previously defended Cuomo in a bizarre segment where he set his sights on Fox News, a frequent target of CNN.

According to Stelter, calls for Cuomo to be suspended or fired come from “bad-faith actors” who are politically motivated. Fox News, the host argued, would hand out a suspension in that situation – which would equate to a “couple weeks” by a pool, according to Stelter. Cuomo’s true punishment was apparently the May statement – a “public scolding” – from CNN simply saying the host would not be advising his brother’s administration going forward.

Chris Cuomo himself doesn’t seem too concerned about the controversy. He was confronted this week by a Fox News reporter about his brother, and the CNN host remained mostly silent in the face of legitimate questions.

After acknowledging that he has spoken to his brother since his resignation announcement – the former governor continues to deny sexually harassing anyone – Cuomo went silent on whether his brother should have stepped down. He also reportedly threatened the journalist off camera that he could have him arrested by state troopers.

The passive-aggressive response from Cuomo feels a little unnecessary since his network appears to be steadfastly in his corner. Despite growing concerns about Cuomo, CNN has long ignored controversy surrounding their host and his brother. It’s not as if these Cuomo accusations dropped out of thin air. For the better part of the pandemic last year, Chris Cuomo and CNN were often targeted by critics for appearing to willfully ignore the then-governor’s troubled leadership.

To have Stelter be the man chosen to wave the flag for Cuomo is ridiculous. He has an incredibly sketchy relationship to the supposed “journalism ethics playbook.” This is the same ‘journalist’ who tried to stir up a ‘Missing Melania Trump’ story in 2018 that ignored the fact that she was recovering from surgery at the time and had been seen by a journalist only a few days prior.

Stelter is a company man and he’s putting the best face he can on the Cuomo controversy, defending his network and his colleague while never really directly acknowledging the real concerns people have about his network and its relationship to Democrats.

To put Stelter’s Cuomo defense in more context, this is the same man who also defended liberal actor Jussie Smollett after he was accused of faking a hate crime in 2019. The performer claimed two Donald Trump-supporting racists were trying to hang him on the streets of Chicago.

A changing story, mounting evidence and multiple people coming forward to say they were involved with the hoax were not enough for Stelter though, who said in March of 2019 that “we may never really know what happened” to Smollett. The actor, who maintains his innocence, is awaiting trial over allegations of false statements to police about the incident.

This is Stelter’s game. His show primarily functions as an examination of modern media, though he keeps his attention focused on conservative outlets, such as Fox News. Attacking more liberal figures and networks is simply not beneficial to Stelter’s brand, which is why he is so hesitant to blast a Cuomo or a Smollett the way he regularly does conservative pundits he disapproves of, like Fox News’ Tucker Carlson.

Stelter’s defense of his network’s handling of Cuomo – and of Cuomo himself – don’t make a lot of sense because they’re not supposed to. They are generic statements filled with semantics meant to focus attention on CNN’s rivals and illustrate the narrative that a network host willfully ignoring major news stories and controversies and handing positive news coverage to his brother is, somehow, a situation that not one journalist, producer, editor, etc. at CNN can decide how to handle.

Cuomo, meanwhile, remains silent because he doesn’t need to defend himself. He’s got a network and a fellow host to do it for him. This has essentially become an ethical dilemma for CNN where no one addressing the issue actually addresses the ethical dilemma. Meanwhile, Cuomo may not be “hanging by a pool for a couple weeks,” as Stelter claims Fox would do to him, but he is enjoying some leisure time while avoiding a bombshell story that should be greatly affecting his career and standing with his network.

Don’t worry, though. He’s already had an “actual punishment.” Stelter told us, so it must be true.