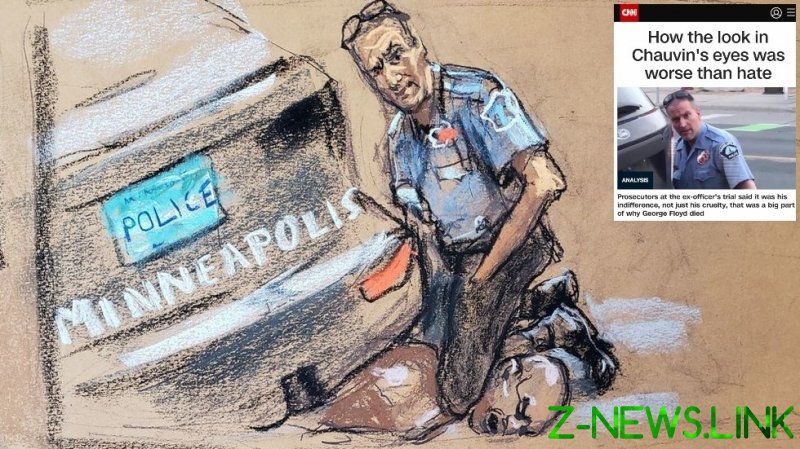 A Minneapolis jury on Tuesday convicted Chauvin of second- and third-degree murder, as well as second-degree manslaughter, for his role in the death of George Floyd last May. The verdict was as favorable as any Black Lives Matter activists or their supporters in the media could have hoped for, but already they were looking for new ways to keep Chauvin, and more broadly America’s supposedly “white supremacist” system on trial.

The narrative, promulgated at once by activists, politicians, journalists and corporations, was that the verdict was just the beginning, and that the nation (or rather its white population) still had to “do the work” to uproot and eradicate racism for good.

For CNN, doing this “work” involved looking into Chauvin’s soul through his eyes. In a piece of ‘analysis’ published on Saturday, writer John Blake looked into Chauvin’s eyes and saw “something worse than hate” – “indifference.”

To Blake, a freeze-framed image of Chauvin looking nonchalant as he knelt on Floyd’s back “tells a story about racism that many people don’t want to hear.” The killer cop’s lack of interest, the argument goes, makes him more racist than if he had screamed epithets into Floyd’s ear.

“Violent acts of White racism grab the headlines,” Blake wrote. “But the most pervasive forms of racism take root when White judges, cops, politicians and ordinary people look the other way to not see what is happening right in front of their faces.”

Except that’s not what happened at all. Disregarding the fact that Chauvin, and police officers nationwide, restrain drug-addled suspects so often that it surely becomes mundane, Floyd’s murder grabbed blanket coverage. Chauvin was arrested within days of killing Floyd, and saw the inside of a courtroom in relatively swift fashion. Protests, rallies and riots against racism dominated headlines for nearly a year, and politicians of all colors on both sides of the aisle rushed to condemn Chauvin’s actions.

It is hard to think of a case of white-on-black violence in history that was less ignored than Floyd’s murder. Protests, for example, took place in more than 2,000 US cities and as far afield as Tel Aviv and Tokyo.

But arguing against Blake is pointless. Nobody but Derek Chauvin knows what it felt like to be Derek Chauvin that day, and how it felt is completely irrelevant. Chauvin is guilty, and barring a miracle in the appeals process, the case is closed.

Headlines like “the look in Derek Chauvin’s eyes was something worse than hate” aren’t an attempt to reveal some fact or truth missed by the prosecution. They’re an attempt to keep an inflammatory story alive for the sake of ratings. CNN isn’t the only network guilty of this. Lisa Christensen, an alternate juror who ultimately did not cast a verdict either way, spoke to multiple media outlets the day after the trial, telling them how she “felt” that Chauvin was guilty, based partly on how he stared at her in the courtroom. It’s a good thing for the legal system that “uncomfortable” stares don’t decide the fate of the accused, but a terrible thing for the news media

A CNN director straight-up admitted this month that the network sees itself as allied with the BLM cause, and pushes stories of white-on-black violence because – direct quote – viewers “lap it up.”

As Chauvin’s verdict was being read, CNN’s viewership doubled over the day before. During the trial itself, pivotal days drew more viewers mid-afternoon than CNN’s primetime hosts did. And, the New York Times reported, CNN’s sister network, HLN, covered the entirety of the trial and earned “its highest ratings since its coverage of the George Zimmerman trial in 2013.”

Chauvin was a ratings hit, just like Floyd’s death last year propelled CNN’s ratings to their highest level in 40 years.

With news ratings and sales down across the board since Donald Trump left office in January, CNN’s frantic attempts to shovel coal into the racism furnace make sense. This desperation is likely the reason why CNN, MSNBC and their ilk are pumping out multiple stories a day for the last week on the police shooting of Ma’Khia Bryant in Ohio, who was gunned down by a cop seconds before she plunged a knife into another teenager.

As martyrs go, Bryant is a tough one to get behind, especially as she proclaimed “I’m going to stab the f**k out of you, b**ch” before her ill-fated lunge at her target. Even CNN admitted that the police officer was probably justified in shooting Bryant down, but over at ABC, Joy Behar and Sunny Hostin slated the cop for not shooting the moving target “in the leg” or simply firing his gun “into the air.”

It’s all hot air, but it won’t stop until America switches off the outrage networks.