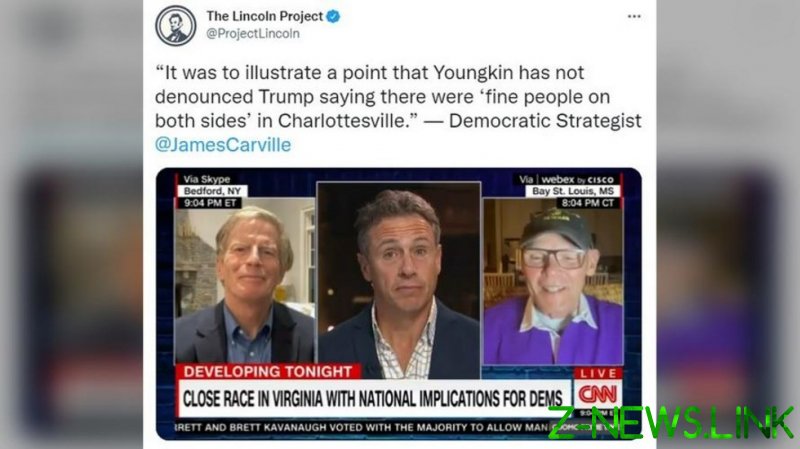 Carville and Stevens were touted as “Republican and Democratic strategists” by CNN host Chris Cuomo, who said they were “better minds” to discuss whether the neck-and-neck race in Virginia was the first measure for the midterm elections. The pretense of partisan balance, however, was undermined by the fact that Stevens’ Lincoln Project had just pulled off a controversial publicity stunt aimed at hurting the chances of Republican candidate Glenn Youngkin.

The Lincoln Project took credit for bringing in a group of fake white supremacists carrying tiki torches and expressing support for Youngkin. The campaign of his Democratic rival, Terry McAuliffe, denounced the stunt, but there have been suspicions among many conservatives that Stevens’ anti-Trump outfit coordinated the operation with state Democrats.

Inevitably, the political stunt came up during the conversation, with Stevens patting himself on the back for it.

“Listen. Every day I hear people pleading to the Lincoln Project to help show Democrats how to win, how to play hardball. You know, this is an example,” he said.

His contribution to the CNN segment was actually limited to that, and a reiteration of the Lincoln Project’s rationale. The stunt was meant to harken back to the August 2017 ‘Unite the Right’ rally in Charlottesville, Virginia, which turned violent – presumably to corner Youngkin into denouncing former President Donald Trump for saying there were “very fine people on both sides” of the Unite the Right rally and counterprotest. Trump’s critics claim the phrase was a dog whistle to violent neo-Nazis, who Trump actually condemned during the same press conference.

During the interview, Carville sided with Stevens, saying that the Lincoln Project was independent from Democrats in Virginia and that the real issue with the stunt was Youngkin refusing to denounce Trump.

Some media observers found the video, which the Lincoln Project proudly shared on its Twitter account, quite revealing with regard to CNN.

“If you work at CNN and are genuinely baffled why a) nobody trusts you, b) you are widely hated, and c) your audience is gone, wonder no more. Just look in the mirror,” journalist Glenn Greenwald said.