Clinton urges Biden to not concede ‘UNDER ANY CIRCUMSTANCES,’ calls for ‘massive legal op’ in case Trump sees narrow win 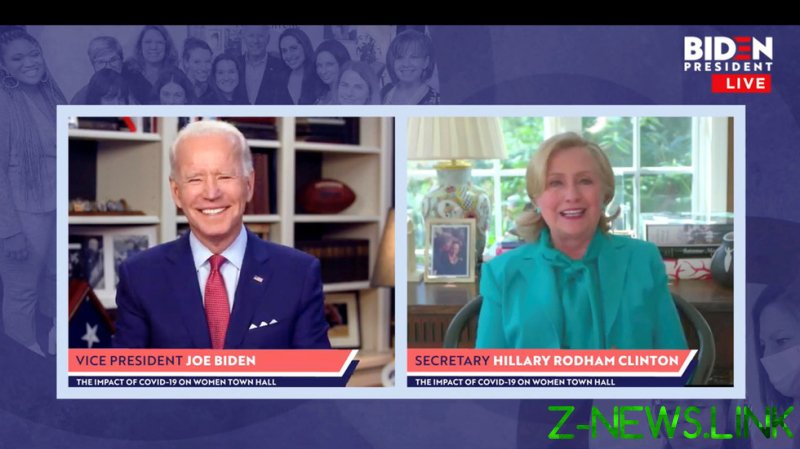 In a clip, released just as the Republican National Convention was about to kick off on Monday evening, Clinton argued that if Trump emerges victorious in the November presidential contest but with a small margin, Biden should refuse to acknowledge the Republican’s victory.

Instead, the former VP must brace himself for a dragged-out legal battle in which, Clinton believes, he would prevail in the end.

The Republican Party’s national spokesperson Elizabeth Harrington called on mainstream media to step up and grill Clinton, as well as “every single Democrat,” on whether they would accept the election result, the same way they have done with Trump.

“I’m sure the media will frantically ask every single Democrat if they will accept the results of the 2020 election,” she said. “They’re literally telling us they won’t.”

Trump supporters dug up Clinton’s own tweets from before the 2016 vote, in which she described questioning the outcome of presidential elections as a “threat to democracy.”

Clinton’s claims that Trump would try to derail the mail-in voting system in order to sway the election in his favor mirror similar accusations by congressional Democrats, who have argued that Trump has sought to undermine the 2020 vote by withholding funding from the US Postal Service. The Democrat-led campaign saw 26 Republicans joining House Democrats in a vote for a bill on Saturday that would earmark $25 billion to support universal mail-in voting on election day. The bill, however, is likely to hit a stonewall in the Republican-majority Senate, with Trump himself squarely opposing the universal rollout of mail-in ballots, arguing it would make elections vulnerable to fraud.