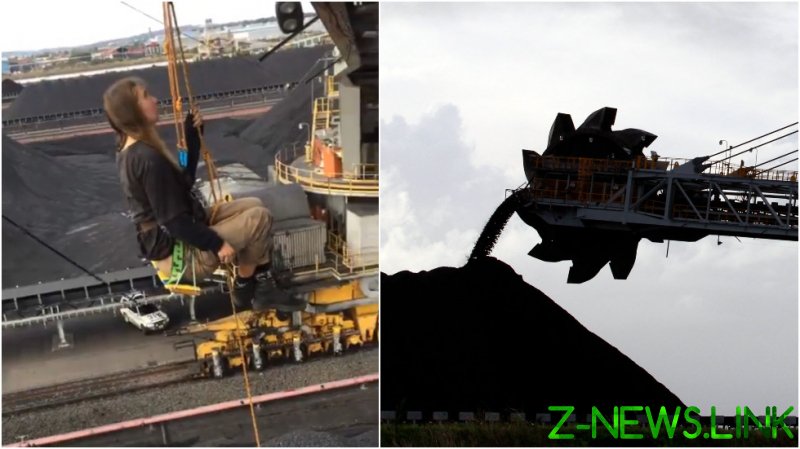 Blockade Australia, a climate group focused on “strategic direct action,” declared that two of its members had clambered atop equipment at the Port of Newcastle and stopped work there late on Tuesday night, sharing footage captured by the activists as they suspended themselves from a large loading machine.

“Zianna and Hannah have shut down Newcastle coal port, abseiling from coal handling machinery. The port cannot resume operations until the pair are removed by police,” the group said, identifying the activists by their first names only, adding “This is the tenth consecutive day of disruption to Newcastle coal port and its supply rail network.”

The protest stunt follows at least 16 similar actions over the last week or so, the group said, some targeting the rail line near the port, the world’s largest for coal exports.

Another demonstration carried out on Tuesday saw a second pair of activists breach the port and “hit emergency stop buttons” on machines before strapping themselves to a different piece of equipment. They were brought down and arrested after “several hours” and are expected to appear in court in the coming days.

The disruptions have drawn the ire of state officials, with New South Wales’ Environment Minister Matt Kean calling them “completely out of line” and urging police to “throw the book” at the protesters, at least 19 of whom have already been arrested so far this month, according to ABC.

“Pull your heads in, get out of the way and stop hurting other people going about their lives, running their businesses,” the minister said during a radio interview on Wednesday. “There are hundreds of ways to make your views known and advocate for change, but risking the lives of rail workers is definitely not one of them.”

The activists could face charges that carry maximum sentences of 25 years in prison, NSW’s police commissioner Mick Fuller said, noting that local law enforcement has created a “strike force” to deal with future disturbances at the port.