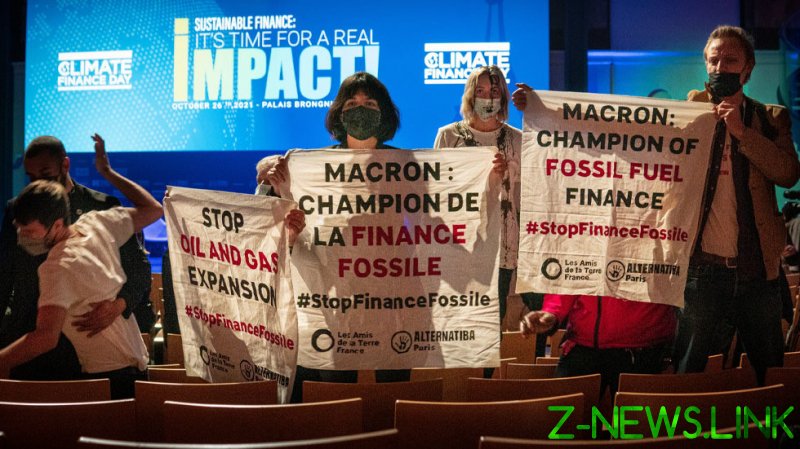 Minister Bruno Le Maire was speaking at a green finance summit in Paris when activists from the climate campaign group entered the venue to demand that the French government unveil stricter measures to tackle climate change, including ending investments in fossil fuels.

Disrupting the speech, the activists unveiled a banner declaring “Macron: Champion of fossil fuel finance,” as well as calling on government officials to “stop oil and gas expansion.”

After attempts to remove the protesters from the venue, four individuals were arrested and six others taken away by police, according to the campaign group. It is not clear what they have been charged with.

Before the interruption, Le Maire had been discussing how the French government is seeking to allocate any tax revenues generated from fossil fuels to help the country transition to a more environmentally friendly economy.

“If we guarantee that every euro of tax revenue on petrol, diesel, gas and fuel oil will be allocated … to the fight against global warming, I am convinced that will facilitate financing the ecological transition and make the tax system more acceptable,” the finance minister said.

The shift in strategy comes after a French court demanded that the country honor its pledges to tackle climate change. Back in August, Macron’s government was fined €10 million ($11.6 million) by the country’s highest administrative court for failing to secure improvements in air quality.