Home / WORLD / ‘Class cleansing’ is killing London, as poor people are removed from communities like vermin

‘Class cleansing’ is killing London, as poor people are removed from communities like vermin 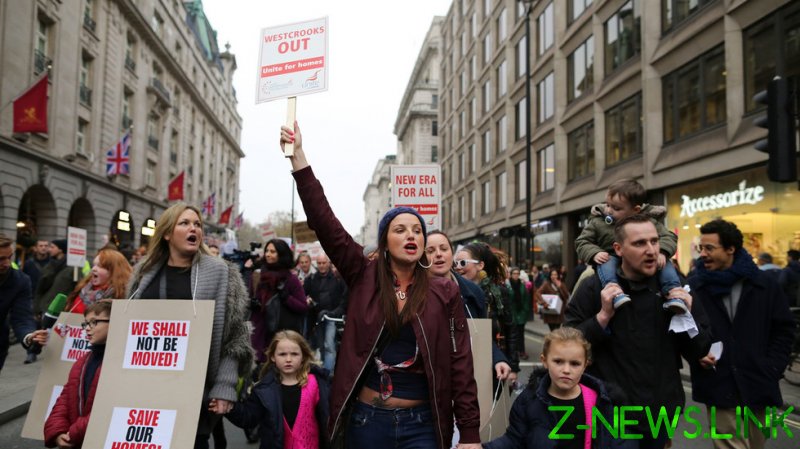 Gentrification is not a new phenomenon but it is clear that it is out of control in London.

As with many cities, it is a process the UK capital has been familiar with for some time. Poorer communities have been moved out of neighbourhoods in favour of a ‘better’ class of people for generations, and in the early 1960s sociologist Ruth Glass coined the term ‘gentrification’ as the old Victorian properties of Islington were bought for a song by the affluent middle classes.

These once-grand houses, which had fallen into disrepair housing society’s poorest, were renovated and modernised, with the aid of local government grants, by many of the middle-class gentrifiers. What had become slums were transformed into million-pound properties and are now among the most sought-after houses in the country, with Islington firmly established as a political, media and cultural enclave. It is no coincidence that Tony Blair, Boris Johnson and Jeremy Corbyn have all lived in the original gentrified borough.

The working-class residents who lived in the squalid, overcrowded conditions were moved into newly built council housing, as the consensus between political ideologies after World War II continued. Millions of social housing properties were built around the country, allowing many working-class people to live in dignity for the first time, with indoor bathroom facilities, clean running water and a sufficient number of bedrooms for children and parents to sleep separately.

Today, though, there is no political consensus to provide good, affordable housing for working-class people, just a laissez-faire attitude that it should be left to the market. In fact, we can look back to the early ’60s – with the slum clearances, the high -rises and the council house building – and think, for all the faults, that these were the good old days compared to what is happening now, as was evidenced by a report last week from the Runnymede Trust and CLASS think tank titled ‘Pushed to the Margins’.

It describes contemporary gentrification in Tower Hamlets, Wandsworth and Newham in London that is alarming and aggressive, with working-class people being violently displaced. And what is especially concerning is that it is working-class people from black and Asian communities who seem to be particularly affected.

They are being pushed out to the furthest points of the capital, away from transport links, meaning that if they work in central London their commute for minimum wage jobs becomes ever longer and more uncomfortable, in packed buses and tubes. Contemporary life for working-class people in Britain means longer, more expensive, insanitary commutes.

This is nothing more than what I call ‘class cleansing’. I undertook extensive research on this process in London between 2013 and 2018 – a five-year ethnography of what happens to working-class people who are being crushed by what is not now ‘gentle’ gentrification, but a horrific Manhattanisation process.

No longer is it the middle class gentrifying parts of Victorian London, but instead we see a global elite army of property developers – aided and abetted by local and national politicians – who are inflicting this ‘class cleansing’.

They are removing working-class people from communities as if they were vermin, with no thought or care of where they go, and there is no real economic or social solution being put forward by any of the mainstream political institutions. Meanwhile, the council estates are being bulldozed to make way for luxury towers soaring into the sky – soulless, lifeless and disconnected from the streets and the people of the city.

Four years ago, I lived in Tower Hamlets and was part of a housing movement trying to bring attention to the class cleansing occurring in London. I was contacted by a woman who worked in a private lettings agency in North Nottinghamshire, who informed me a woman from the borough of Barking and Dagenham had just turned up at her office with two Ikea bags stuffed with her belongings, and two small children.

She had been sent to Nottinghamshire with no more than an address by the housing official. Since arriving in the UK from Nigeria 10 years previously, she had never lived outside London and over the years had found it impossible to find somewhere affordable and safe to live. She had a Master’s degree, but was unable to put it to use because without a home and stability you cannot find and secure a decent job. That takes headspace and commitment, which you simply can’t have when you are living out of carrier bags, being moved around with two kids.

Barking and Dagenham Council had an arrangement with a private landlord in North Nottinghamshire to house families that London had no room for. The council had paid the deposit and two weeks’ rent upfront, and the mother and her children were housed in a flat in an old mining village that was remote and had very few services and little public transport. I made contact and visited her, and she told me she desperately wanted to get back to London – she was totally isolated. This poor mother and her children had been cleansed out of London – not good enough, not rich enough, not productive enough for Britain’s capital city.

Her story did not end well – she became very ill and her children were put into care in Derbyshire, and I lost contact with her about two years ago. But this is not an isolated incident. I have met women and children who have been forced out of many ‘successful cities’ throughout the UK – it is a violent, abusive process and it is the state, local councils and bureaucrats who are inflicting this misery on working-class families without being held to account.

As temperatures soar this week and we see images of rich people floating in sky-high glass-bottomed swimming pools looking down on London, the symbolism of the gap between those at the top of society and those at the bottom has never been so stark. It is unequal, unfair and cruel. For all the talk about coming out of the pandemic and rebuilding society, are working-class people included in this vision? I doubt it.