Home / WORLD / Clashes break out in Jerusalem as right-wing Jewish rally chants ‘Death to Arabs,’ faces off with police (VIDEOS)

Clashes break out in Jerusalem as right-wing Jewish rally chants ‘Death to Arabs,’ faces off with police (VIDEOS) 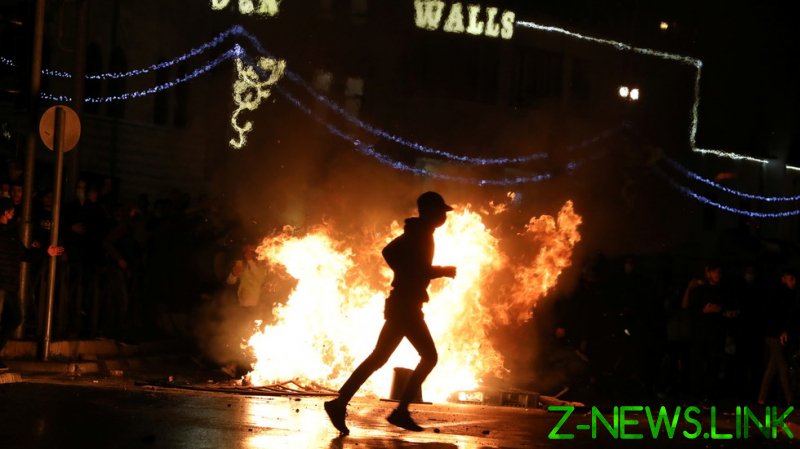 The Jerusalem District Police kept a heavy presence in the city on Thursday night and into Friday morning amid the violence, which saw scores of Jewish marchers stream through the Jerusalem, some taking part in menacing chants such as “Death to the Arabs” and “May your village burn down,” according to local news reports.

At least 79 arrests were made over the course of the night, including five Israelis for “suspicious behavior” – some of whom were armed with hammers and other makeshift weapons, Haaretz reported – while dozens more were picked up in clashes with police and other opposing demonstrators. Both Jewish and Arab protesters reportedly threw stones and launched fireworks at officers.

Footage circulating on social media showed a number of scenes from the confrontation, including when police unleashed stun grenades and “skunk water” cannons on the crowds. Mounted officers were also present.

Other unconfirmed footage purported to show an attack on an Arab household by a Jewish group, in which people are seen hurling objects at the home, while yet another clip appeared to depict a demonstrator hitting an officer with a stone at point-blank range.

Fires were also ignited in the street by protesters, with videos showing a vehicle going up in flames and what appeared to be a public security camera destroyed and set ablaze.

According to local broadcaster Kann News, some of the Israelis present were linked to the Lehava organization, a militant right-wing movement fiercely opposed to Jewish-Arab integration, which Israeli officials have previously considered labeling as a terrorist group. Lehava’s leader Ben-Zion Gopstein attended Thursday’s march, where the Jerusalem Post quoted him as saying “We’ve come here tonight to clarify to anyone who thinks otherwise: Jerusalem is ours!”

Though police did appear to take measures to halt the Israeli activists, the head of Israel’s Arab Joint List party, Ayman Odeh, questioned the “intentions” of the security forces, claiming they had enabled the far-right demonstrators to “organize a pogrom tonight.”

The unrest comes amid a string of violence during the Muslim holiday of Ramadan, which has seen tit-for-tat attacks and reprisals between Arabs and Jews. Helping to fuel the tensions, a  number of videos have recently made the rounds on TikTok showing Palestinians assaulting Israelis, including one group who beat a driver in the street and later reportedly set his car on fire.

Jerusalem itself is at the heart of a decades-long dispute between Palestinians and Israelis, with the city holding major religious significance for both Muslims and Jews. Its western half was incorporated into the newly created state of Israel in 1948, after the United Nations recommended dividing the city between the two sides, while its eastern portion was captured by Israeli forces during the 1967 Six Day War and has been under military occupation ever since. Israeli settlements continue to encroach into East Jerusalem, which has been deemed a violation of international law by the UN and other world agencies.