Clashes break out at massive pro-Palestinian rally in Toronto (VIDEOS) 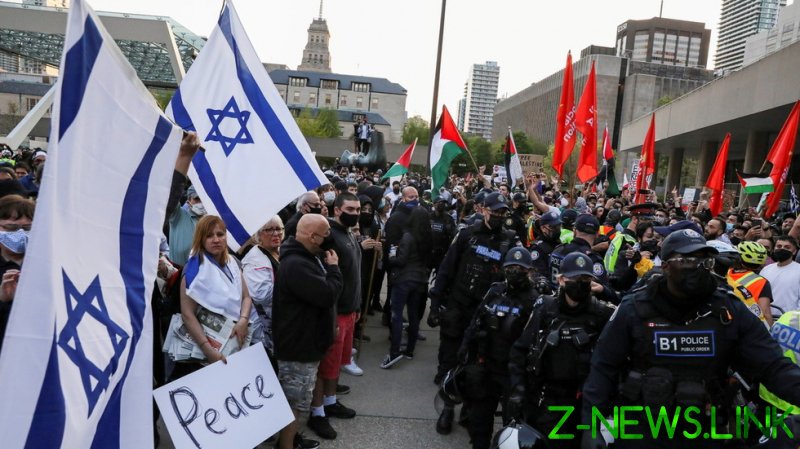 The rally, organized by the Palestinian Youth Movement (PYM), was held in central Toronto on Saturday. The organizers urged the participants to show their support towards the Palestinian cause, condemning the past and ongoing “ethnic cleansing of Palestine.”

The protesters carried a large Palestinian flag and chanted “Free free Palestine, occupation is a crime.”

The rally encountered a small-scale counter-protest, with some activists displaying insignias of the Jewish Defense League (JDL), a religious-political organization devoted to battling anti-Semitism “by any means necessary.” The JDL is designated a terrorist group in the United States.

While the opposing rallies were separated from one another by a massive police barrier, this did not prevent sporadic clashes.

At least one pro-Palestinian protester was detained by the police for assaulting pro-Israeli protesters. The arrest further angered the crowd, with some protesters accusing the officers of being “Zionist” as well. Anti-police slogans were heard during the altercation.

At least one pro-Israeli activist was assaulted by rowdy pro-Palestinian protesters, who attacked the elderly man with sticks and pant belts. The protester sustained injuries to his head, footage from the scene shows.

The pro-Palestinian gathering has been blasted by Jewish advocacy group B’nai Brith Canada, which condemned it for “brutal assaults” on the pro-Israeli activists. The groups invoked the Covid-19 card as well, branding the rally a “super-spreader” event.

The protest comes amid ongoing escalation in the Middle East. Israel and the Hamas militant group have been exchanging air and rocket strikes for several days. The flare-up has resulted in civilian deaths on both sides of the conflict.