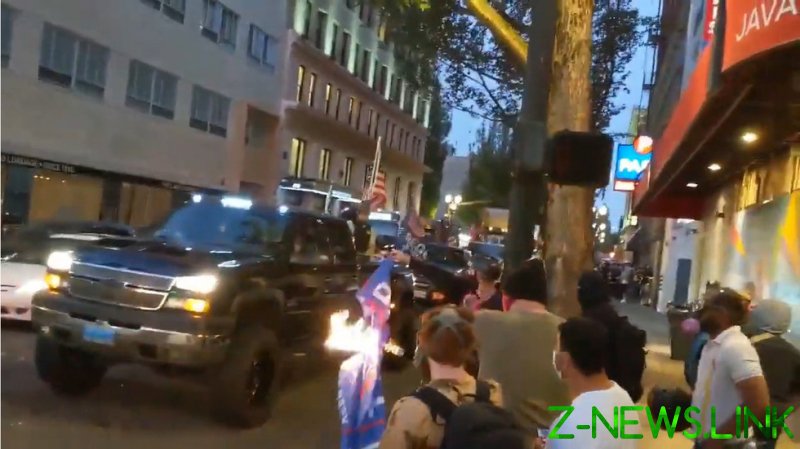 Several hundred vehicles rolled into the streets of Portland on Saturday evening, many displaying Trump/Pence 2020 flags. The noisy procession launched from Clackamas, a suburb of Portland, which hosted a pro-Trump rally earlier in the day, and reached the city by 6pm, The Oregonian reports.

As the avant-garde of the caravan entered Portland, it was met by Black Lives Matter protesters, lining the sidewalks. Videos have emerged showing activists throwing projectiles at cars and burning Trump campaign banners, with pro-Trump demonstrators responding by macing them with pepper spray and firing paintball guns.

In one incident, protesters flooded the intersection in an attempt to prevent the caravan from taking a loop around downtown. The drivers, however, broke through the lines after dousing activists in pepper spray and forcing them to scatter.

One counter-protester attempted to block the procession by stopping in the middle of the road and turning on emergency lights. The female driver reportedly played “F*ck Donald Trump,” telling the media that she was obstructing the caravan’s passage because Portland, which has been beset by violence for over 90 nights, is “supposed to be a progressive city.”

Other footage shows left-wing demonstrators and Trump supporters exchanging punches in the streets.

There have been reports of arrests.

President Trump, who is running on a law and order platform in his bid for a second term, has been blaming Portland’s protester-friendly mayor for turning a blind eye to virtually daily clashes between activists and federal security officers. The local authorities downplayed the violence and accused the president of stepping out of the line after he deployed additional federal forces to Portland. Pro-Trump demonstrators have been showing up in Portland for three consecutive weekends.