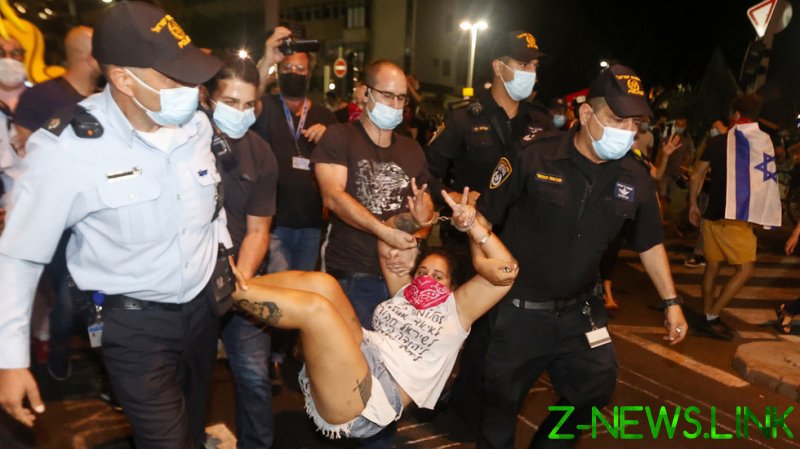 At least 38 activists were detained in Tel Aviv alone for “violating public order” and allegedly “attacking police officers,” according to the Times of Israel.

Multiple people were wounded in clashes, including Tel Aviv Mayor Ron Huldai, who received an injury to his hand, as protesters accused police of using excessive force.

Dozens were caught venting their anger ‘too far’ from homes and slapped with fines under the new lockdown legislation approved by the Knesset this week.

Slammed by critics as a draconian crackdown on freedoms, the law prohibits Israelis from gathering more than one kilometer from home, to maintain “socially-distanced bubbles.”

The controversial law effectively put an end to massive anti-government marches and weekly rallies outside of Prime Minister Benjamin Netanyahu’s residence. However, the total number of people protesting in smaller groups in hundreds of places all across Israel this Saturday could be even higher than before, according to some media estimates.

Israel has endured months of anti-government protests, primarily focusing on the alleged corruption of the prime minister. Netanyahu has been entangled in several criminal probes and protesters have called for his resignation.

The coronavirus crisis and its handling by the government have generated further dissatisfaction, which only deepened after the second nationwide lockdown went into effect on September 18 amid a surge in new infections.