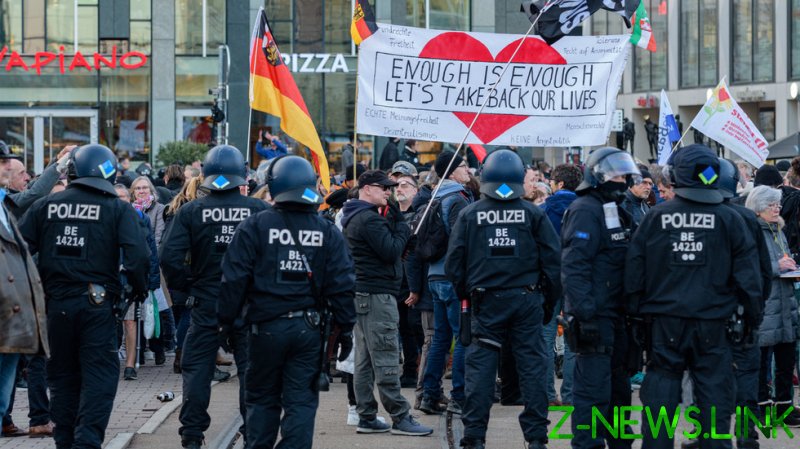 A large police force was deployed to Leipzig where a total of 12 protests were scheduled to take place. Armored police vehicles were seen on the city’s streets.

More than 1,000 people gathered in the city center near the Leipzig Opera to voice their discontent with the measures taken by the federal and regional authorities to contain the spread of Covid-19.

The protesters demanded “freedom” from Covid-19 measures and protested what they called “mandatory vaccination.” The police designated a second meeting area for the demonstrators at nearby Goethestrasse Street after the participants’ cap, restricted to one thousand people, was exceeded.

Footage by RT’s video agency Ruptly showed a tightly packed crowd occupying a large area not far from the Opera. People were waving German flags and were holding banners that read: ‘No to dictatorship’ and ‘Freedom instead of despotism’. The crowd was cordoned off by police officers wearing riot gear and at least two water cannons were seen deployed to the square.

A counter-demonstration involving around 800 people was organized near Leipzig’s Gewandhaus Concert Hall, just across the square from the Opera.

At a certain point, the crowd protesting the Covid-19 measures attempted to stage a march along the city’s ring-road. The police intervened and blocked the march, arguing that no marches were allowed in the city because of Covid-19 restrictions.

The situation quickly escalated. Videos published on social media showed brief intense clashes between the protesters and the police as some rally participants sought to break though the law enforcement cordon. Police used pepper spray in response.

Even before the clashes erupted, the officers detained 24 people they designated as members of various right-wing movements. “These people were taken into custody because of their behavior and the objects they were carrying,” the police said on Twitter.

The demonstration came after the Saxony government announced the tightening of Covid-19 restrictions for those unvaccinated amid rising infection numbers. Only those who are fully immunized or recently recovered from Covid-19 will be allowed into indoor catering facilities, bars, clubs as well as various public events with more than 1,000 participants, both indoors and outdoors.