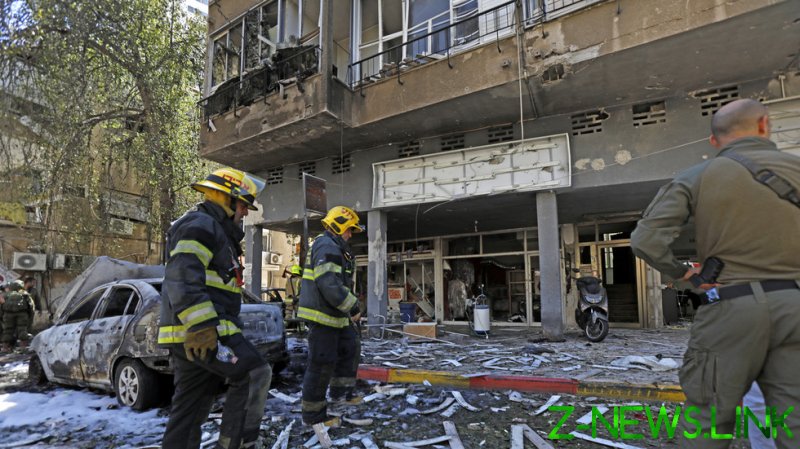 A video by RT’s Middle East Bureau Chief Paula Slier shows damaged buildings and first responders on the street. A parked vehicle was destroyed and others were damaged.

Rocket warning sirens were again heard in Tel Aviv and other cities across southern and central Israel. Projectiles launched from Gaza fell on another town near Tel Aviv, Rishon LeZion, and the Arab town of Tayibe. There were no reports of casualties on the ground.

Previous reports said that at least nine people were killed in Israel as militant groups Hamas and Islamic Jihad launched more than 2,000 rockets since Monday. Most of the projectiles were destroyed mid-air by Israel’s Iron Dome anti-missile system, but others fell on residential areas.

The IDF responded to Hamas’ attack by bombing multiple targets in Gaza. On Saturday, the army leveled the Al Jalaa tower, which housed several media outlets, including AP and Al Jazeera. The IDF warned reporters of the incoming airstrike so they would have time to flee.

Gazan medical officials said that the IDF killed a family of ten, including eight children, in one of their air raids on Friday night and early Saturday morning. Israel’s Channel 12 cited military sources saying that senior Hamas members were meeting in the building at the time.

The Israeli military says it only targets Hamas operatives and infrastructure they use for attacks. According to Palestinian officials, the death toll in Gaza now stands at 140 killed, including 39 children.