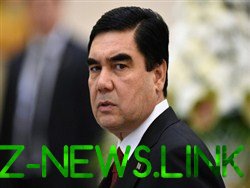 At least three citizens of Turkmenistan are detained on charges of spreading rumors about the death of the President of the Republic Gurbanguly Berdimuhamedov. It is reported “Chronicles of Turkmenistan”.

According to the newspaper, security forces in the capital Ashgabat and in the regions were transferred to the strengthened option of service to combat false reports of death or ill health of the President.

For spreading “rumors that contribute to destabilization in the country” detained by the Lebap branch of “Turkmentelecom”, a worker of water management and the employee of housing and communal services.

The first message about the death Berdimuhamedov appeared on the night of 20 July on YouTube. By this time he had not appeared in public for 15 days. The message was made by the writer Akmuhamed Wellseparated and caused a great stir in the media. The next day of the death of President Director of monitoring Centre of the Eurasian problem, a political scientist Aslan Rubaev, but that same day he apologized for the mistake. He noted that information about the death of Turkmen leader has denied its the same source that reported it initially.

On 25 July the President of Turkmenistan for the first time appeared before the cameras after reports of his death. The footage, which showed the TV channel Altyn Asyr, Berdimuhamedov with a pointer in hand review of it infrastructure projects for the development of Ashgabat. Also, the press-service of the head of Republic has informed, that on that day, Berdimuhamedov on the phone congratulated the President of Uzbekistan Shavkat Mirziyoyev, happy birthday.