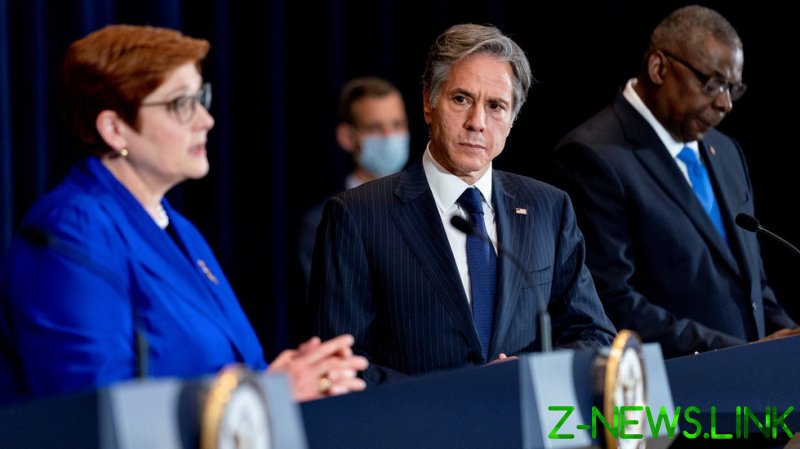 US Secretary of State Antony Blinken hailed the recently-unveiled AUKUS treaty as a sign of “the country’s shared commitment to safeguard peace and stability in the Indo-Pacific now and in the future” during a Thursday press conference in Washington, DC, adding that the US has concerns about Beijing economically pressuring Australia. Australian Foreign Minister Marise Payne praised the newly-strengthened US-UK alliance as “well-suited for countering economic coercion.”

Giving an overview of the “historic new chapter” unveiled on Wednesday by President Joe Biden during his first meeting with the Australian PM since becoming president, Blinken noted the signatory nations would be “strengthening joint capabilities and interoperability in cyber, AI, quantum technologies, additional underseas capabilities,” information sharing, industrial bases, and supply chains.

The first project to be undertaken under the treaty is delivering nuclear-powered submarines to Australia, Blinken announced, clarifying that it would be the three nations in the new alliance that would be responsible for sourcing the subs. In addition to helping to source nuclear-powered subs, the US will provide “rotational deployments of all types of US military aircraft” to Australia, shoring up its air defenses, Defense Minister Peter Dutton said during the news conference.

Cushioning the news a bit, Blinken insisted he “welcomed” the US’ European allies playing an “important role in the Indo-Pacific,” looked forward to continued close cooperation with NATO, the EU, and “others in this endeavor,” and most emphatically denied the existence of any “regional divide” separating the interests of Washington’s Atlantic and Pacific allies.

“France in particular is a vital partner on this and so many other issues, stretching back generations, and we want to find every opportunity to deepen our transatlantic cooperation in the Indo-Pacific and around the world,” Blinken insisted.

Despite the official’s nod to France, however, Paris remained jilted over the announcement that it was the US and UK that would be supplying Australia with a fleet of submarines – something the French already had a $40 billion contract to do. The French government even canceled a gala meant to celebrate the 240th anniversary of the Battle of the Capes, celebrating US-France relations, over the submarine deal, according to the New York Times.

Even UK defense minister Ben Wallace expressed sympathy for the French following the announcement of the AUUKUS partnership, though he insisted the alliance not meant to be a “betrayal” of Paris by the trio of allies.

Blinken also promised the US would stand by Australia in event of attempted Chinese economic coercion, hailing the two countries’ “unshakable alliance” and ability to defend the “international rules-based order.”