Home / policy / Circle of treason: why the Russian authorities was so excited 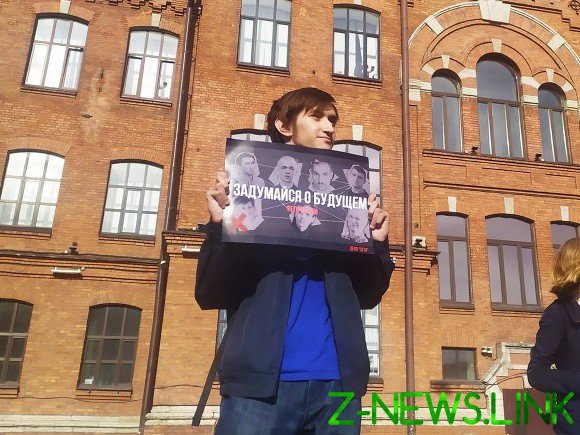 Background the first days after the “reset” — scary-dark. Instead of a national holiday started a witch hunt.

By the actions of various representatives of the regime now is very easy to understand how far the actual numbers of voting on amendments to the Constitution from “triumph”. Not so behave, the real victors. They should be relaxed and generous — why bother when 80% of the citizens are all happy and approve. And we have upstairs right confusion for some.

Instead of celebrations — arrests. Instead favors the majority that showed, according to the press Secretary of the President, “the highest turnout and the highest level of support,” the increase in housing prices directly from 1 of July to the attacks on those who said “no”.

Boils are usually subtle scenarios. Some senators propose to call “traitors” all those who campaigned against the rewriting of the Basic law. Other close afford to criticize the constitutional novel media and NGOs. All of them, according to the Senator Oleg Morozov, — enemy agents, which also sought to reduce the legitimacy of the plebiscite through the lower turnout. “Our monitoring group says the Grand failure of the most ambitious and unprecedented campaign during the voting in Russia, which were organized from the outside and was carried out in our country in the last five months,” in all seriousness, reported the politician.

Third, after listening to the first and second, please expand the already almost boundless powers of the security forces to continue to suppress anything and everything “in the name of protecting our national sovereignty”. The senators obviously very excited, just appeal to brute force. Who are they so afraid of if the vast majority of “for”?

In the Public chamber, which monitored the vote, proposed to create a Ministry of propaganda to convincingly convey to people the truth in the last instance, not confusing the immature minds of discrepancies. Under the distribution even ice cream “rainbow” hit. Who would have thought that the conductors of non-traditional values matched to our children in such savage way? However, there were a good woman, figured out the evil plan of the enemies and reported to the President.

All this would be funny, but the words are doing. Background the first days after “zeroing” is not merely a festive and frighteningly grim. Searches. Courts. Arrests. Surrounded by enemies, spies, traitors, Yes. A glimpse of the TV I saw the advertisement of one dairy plant, so there is even a schoolgirl, sneaking Stashevskiy a piece of sausage from the table, for some reason, called him a “spy.” Directly in the air the mood of the era.

Margarita Simonyan, speaking in one of the posts about who wrote on the ballot “no” when all of her friends without exception set “Yes”, concludes that against the new amendments and the current regime are only marginal, which do not take in decent homes: “laugh at them, condemn them, and remove from votsap-chat… I personally know the person, a small business owner in a small town, which fired only one hundred of their employees, voted against. Not because he, the employer, would have snitched from the mayor’s office or something — nobody watched, and it is impossible to trace a vote whose employees, they were not taken in areas. But because the officer and so “Gunilla” — late, not picking up the phone was rude. And then there’s stated that he’s against…”

Sorry for the long quote, but in this case she is very in tune with all of this unrest is upstairs: after all, from the point of view of those who consider themselves Russian “elite”, good citizens just can’t be against something that the elite does. And who — against the or enemy-a spy-a traitor, or a Lite version Simonyan — marginal and poor performers.

So, of course, psychologically easier to accept the fact that you do not like or even respect. But then what? The dismissal of those who posted in the social networks of their ballots marked “no”? The introduction of criminal article for doubts about the legitimacy of the plebiscite held? Let not love and do not believe — if only were afraid. Not prison — so Sumy. Crazy fines to those who managed to rescue from prison, is an obvious reference to the rich, to put it mildly, the choices we have left.

Don’t know and I don’t even want to think what sort of Kremlin towers with some butt, simply stating: nervousness in the country comes from the top. The lower classes (from most that of the minority) has fallen into a stupor of fallen on them in recent issues: this is a coronavirus and holidays at his own expense, and the loss of many work-business, and mass poverty, and endless war weariness with the world and with ourselves… I Want at least a little notorious stability, which until recently was so proud of our politicians. But today tops hard and harder rocking the boat.

Would I, for example, our senators, a supporter of conspiracy theories, I would think that the enemies are dug in right under the side of the President. Staging the country instead of the triumphant feast — demonstration repression. But I somehow think that it’s just fear to admit that there is no ruling majority have not. A terrible fear of the future.