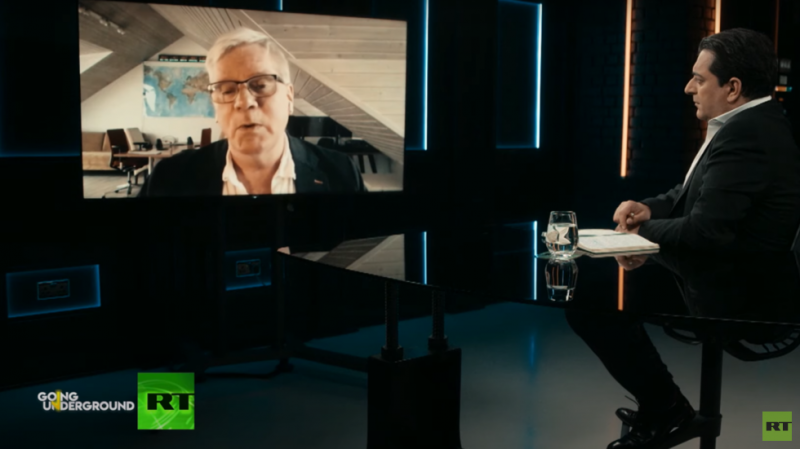 Speaking to RT’s Afshin Rattanshi on his show Going Underground, Hrafnsson said the CIA’s effort to “craft a new definition” for WikiLeaks had meant that the group would be considered “hostile agents” – which, he added, was “basically a licence to kill”.

According to a bombshell Yahoo News report on Sunday, the CIA had sought to define Assange and other journalists as “information brokers” – a process that culminated in former Director Mike Pompeo infamously designating WikiLeaks a “non-state hostile intelligence service” so as to allow the agency to conduct “offensive counterintelligence” activities on the group.

At the height of its preparations for hostilities in 2017, the agency was reportedly expecting Russian agents to help Assange flee the Ecuadorian Embassy in London. In such a contingency, the Americans and the British had drawn up plans for potential street shoot-outs, ramming Russian diplomatic vehicles, or shooting out the tires of a Russian plane to prevent it from lifting off.

Describing the report as a “chilling read for every journalist and individual who cares about press freedom”, Hrafnsson told RT that the thinking behind the agency’s legal maneuvering and planning was “very much in line with previous attempts to use the legal structure and redefine outrageous activity and call it something else.”

Noting that he assumes the core WikiLeaks members were under “extensive surveillance in all aspects” at the time, Hrafnsson claimed the area around the embassy was the “most surveilled part of the world” with “spies [and cameras] in every building” and added that the group suspected “something fishy was going on”.

They had also “gotten wind” of some of the revelations from criminal proceedings in Spain against UC Global SL, the security firm that was contracted to safeguard the embassy but were allegedly “bribed by the CIA to spy” on Assange and planted cameras and other devices to watch him.

“We knew there was a dotted line to the CIA. Now we have the confirmation,” Hrafnsson told RT, adding that the “outrageous” plans to kidnap or assassinate Assange and others in the WikiLeaks circle seemed to have been aborted due to “legal considerations”.

“They were looking for ways to make it legal, not to stop it per se,” he said, adding that this had a “strong implication… for the extradition hearing” that Assange is currently fighting in court. Next month, an appeal by the US Department of Justice (DOJ) to extradite him is expected to reach the High Court in London.

The DOJ has charged the Australian journalist under the US Espionage Act, accusing Assange of having leaked classified information in 2010 that detailed alleged war crimes perpetrated by the US military. If extradited and found guilty, Assange faces up to 175 years behind bars at a federal super-max penitentiary.

Terming the charges against Assange “political persecution”, Hrafnsson told RT that he was being subjected to “punishment by due process” and likened his incarceration at maximum security Belmarsh prison – which houses violent offenders – to “torture”.

“That should be reason enough [not to extradite him],” Hrafnsson said.