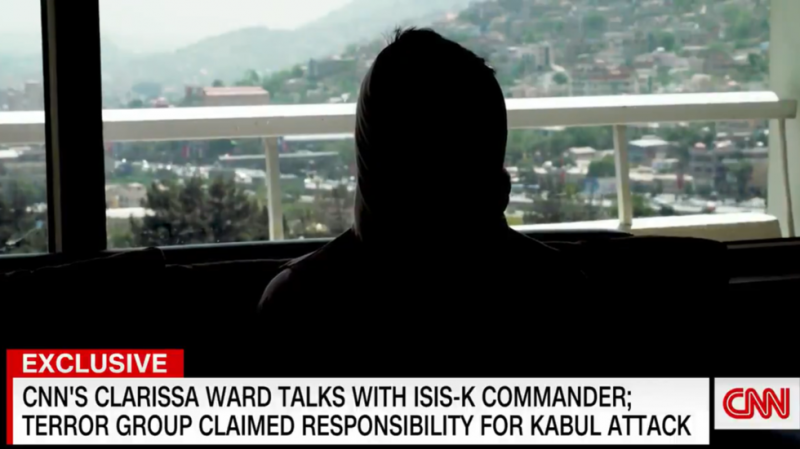 The interview was aired on Saturday, with the “senior ISIS-K commander” telling CNN reporter Clarissa Ward at a hotel in Kabul that the group was “laying low and waiting for its moment to strike.” That moment apparently arrived on Thursday, when a blast for which ISIS-K took responsibility killed 170 Afghans and 13 US servicemen outside the Kabul airport. Hundreds more were injured.

Ward called the commander’s words “eerily prophetic,” but social media users suggested that the statement was more of a plot than a prophecy, considering the commander was speaking of what his group was about to carry out. Others argued that CNN aided and abetted the Kabul attack by having advance notice and apparently doing nothing to help prevent it or lead US authorities to the terrorist commander.

But some found CNN’s explanation of the interview unbelievable, calling it “quite fishy.” As one commenter tweeted, “‘Let’s fly to this place and meet with this terror group K that most people haven’t heard of and understand their intentions,’ said nobody ever. Very fishy.” Another said, “CIA tweets CIA interview with CIA.”

Adding to the irony, the CNN host who aired the interview was Anderson Cooper, the Vanderbilt heir who spent two summers as a CIA intern while he was a student at Yale University.

Other critics blasted CNN for giving airtime to a terrorist leader. “Who are they trying to protect, our people or the terrorist?” one observer asked. “These interviews seem odd to me as I think about the families of our fallen men and women.” Another said CNN allowed ISIS-K to use the outlet as “a no-fee fundraising campaign.”

The ISIS-K interview was not Ward’s only strange encounter with Islamists in Afghanistan. She was mocked for an August 16 report in which she said of Taliban fighters behind her, “They’re just chanting ‘death to America,’ but they seem friendly at the same time.”