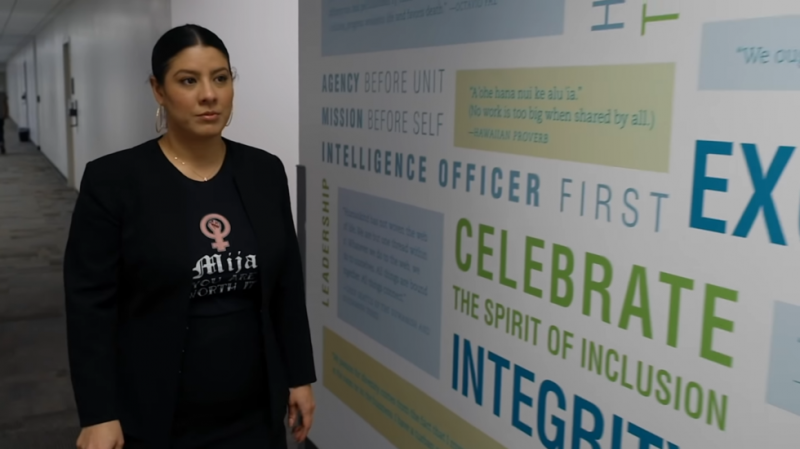 Forget about selling the virtues of illegal rendition, waterboarding, spying on civilians in their homes via their smart TVs, or colluding with narco-terrorists to overthrow foreign dictators, the CIA has weaponised the world of woke in its latest recruitment video.

Having swallowed the entire progressive’s handbook in one go, the slickly produced two-and-a-half-minute ‘Humans of CIA’ video enlists the help of a Latina agent to regurgitate a mess in a bid to attract new recruits to join the world’s most powerful intelligence network.

However, anyone who thought that working alongside the female star of this film might be fun is clearly unfit for active duty.

She is identified only by the name ‘Mija’ – the affectionate Spanish diminutive of ‘my daughter’ – emblazoned on her shirt. We learn everything else about her, other than what the job entails, in what passes for a modern employment application based solely on that person’s identity and how they see themselves.

The incessant woke waffle is exhausting.

She tells us she is a woman of colour, intersectional, a cisgender millenial, has generalised anxiety disorer as well as imposter syndrome, refuses to internalise misguided patriarchal ideas of what a woman can or should be, and used to feel a need to apologise for the space that she occupies.

Oh, and she is 36 years old. In terms of filling in the job application, that’s all the concrete info we have.

She’s not short of confidence, and in response to the question “Is there anything else we should know about why you might be a good fit for this position,” she tells us that nothing about her is tragic, she is perfectly made, and can wax eloquent on complex legal issues in English while also singing ‘Guayaquil de mis Amores’ in Spanish – that would be quite some act to catch. She can also change a diaper with one hand and intoxicate people with her brilliance. Imagine the first date at a bar: ‘Would you like a glass of wine or a pint of my brilliance?’

“I am a walking declaration,” she says. I’ll say. And that declaration is, “Stay away from me, unless you are fully committed to spending the rest of your life wanting to talk about my favourite topic – me.”

There used to be a time when working for the CIA sounded interesting. Edgy, dangerous, important, morally ambiguous. Y’know, real fun. And you could work with some interesting people.

For instance, there were the Nazis they smuggled into America after the war to work on secret projects, the rogue military types who allegedly trafficked drugs for arms to support terrorists in Nicaragua and even evil, semi-mythical agents like ‘The Preacher’, one of three men authorised to waterboard detainees at the offshore prison of Guantanamo Bay.

Even those bird-fanciers who worked on the CIA’s Cold War spy-pigeon missions must have been fun in their own fashion.

I would rather spend my workaday week alongside any of those involved in these often shady, sometimes hilarious operations than with a self-obsessed wokelet employed on the basis of their progressive opinions and deeply held conviction that they were always the most interesting person in the room.

Maybe I have this all wrong. It could be that this new generation of CIA operatives is being deliberately cultivated to convince foreign agencies that the American intelligence service has given up on the spy game and is now exerting all its energies investigating what makes rainbows so beautiful and whether unicorns can actually be trained to dance and eat marshmallows from your hand.

All the important stuff that makes the world a safer place. If that sounds like your cup of tea, don’t hesitate. Apply now.