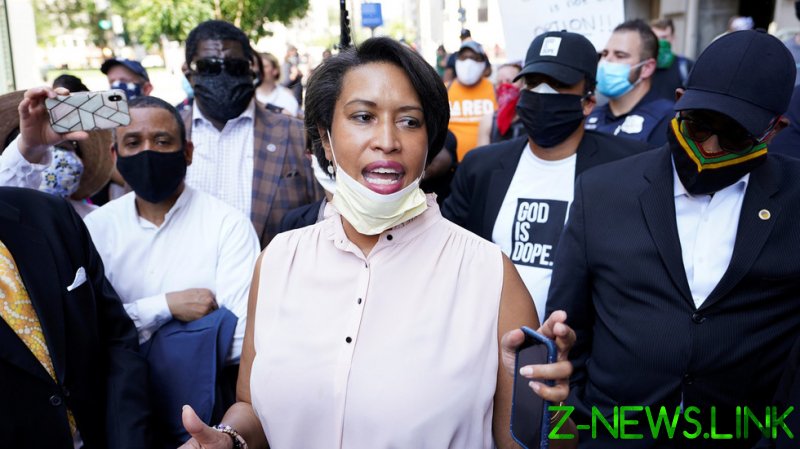 Capitol Hill Baptist Church (CHBC), a leading Baptist congregation in DC, filed a lawsuit on Tuesday, naming Bowser, known for her vocal support of the Black Lives Matter protests, and the District of Columbia as plaintiffs.

In its complaint, the church says that it “takes no issue” with the DC officials’ decision to greenlight mass BLM rallies, since they are “themselves protected by the First Amendment,” but “takes exception to Defendants’ decision to favor certain expressive gatherings over others.”

The lawsuit cites multiple occasions on which Bowser defied her own coronavirus restrictions for the sake of promoting the protesters’ cause. On June 6, 2020, the complaint states, Bowser “appeared personally at an outdoor gathering of tens of thousands of people…describing the large gathering as “wonderful to see.”

The church said that it asked Bowser’s office for a waiver on its services as far back as on June 10 for the request to have been met with a deafening silence. After its first application fell through, the church resubmitted it on September 1 and got a “no” last Tuesday.

The lawsuit claims that when confronted about the issue, Bowser dodged the question, emphasizing the right of the people to protest freely instead.

When asked why she celebrates mass protests while houses of worship remain closed, she responded that “First Amendment protests and large gatherings are not the same” because “in the United States of America, people can protest.”

The church says that its members “reluctantly voted” to initiate proceedings against the mayor seeking to “reclaim their most fundamental of rights: the right to gather for corporate worship free from the threat of governmental sanction.”

The coronavirus policy, that is now in force in DC, caps the number of attendees at religious gatherings at 100 people or 50 percent capacity, depending on which figure is fewer. The restrictions apply to both indoor and outdoor services.

CHBC is not the first US church to challenge the sweeping restrictions imposed on the larger in-person religious services amid the Covid-19 pandemic, alleging bias by state officials. Last month, a Grace Community Church in suburban Los Angeles sued California for effectively giving “favored protesters” a carte blanche to trample on the law.