Christopher Steele, author of the infamous ‘Trump pee-tape’ dossier, stands by his ludicrous claims in a fawning ABC interview 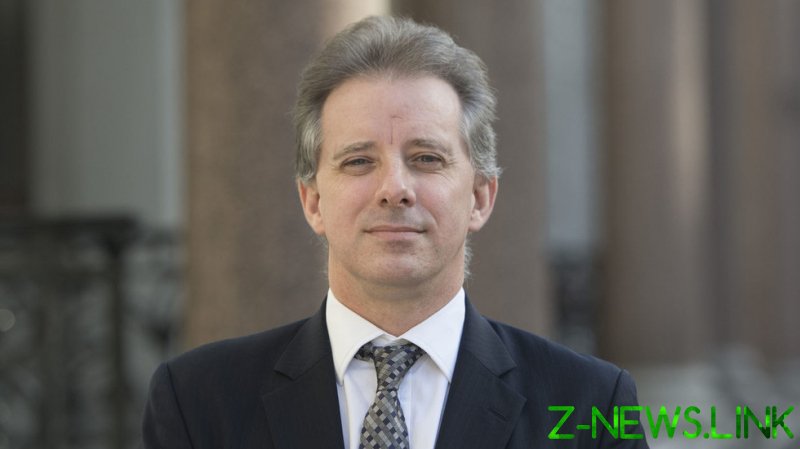 Just as MI6 super spy James Bond is back in theatres with No Time to Die, former MI6 agent Christopher Steele is back in the spotlight with the story that refuses to die, in an ABC ‘documentary’ titledOut of the Shadows: The Man Behind the Steele Dossier, now streaming on Hulu.

Steele came to fame as the shadowy force behind the Steele Dossier, the document which was the spark that lit the Trump-Russia collusion fire that was doused in gasoline by obsessive partisan media coverage and numerous, spurious government investigations for the last five years. The dossier claimed that then-candidate Trump was “colluding with Moscow” and that those devious Russians had “kompromat” on Trump in the golden form of a “pee tape.”

Steele’s “coming out of the shadows” consists of him sitting down with George Stephanopoulos and having a cuddle session on fancy sofas in a posh apartment.

Stephanopoulos is the perfect choice for the softball interview since he and Steele have a lot in common – they’ve both worked for the Clintons. Stephanopoulos as adviser to President Bill Clinton and Steele as de facto dirt-finder for Hillary Clinton’s presidential campaign.

ABC tried to stretch the excruciatingly thin gruel of this supposed ‘interview’ into an hour-long documentary by adding talking heads from their own newsroom. They failed, as the end result is a one-hour show that is hilariously shallow and vapid, even by ABC News standards.

Out of the Shadows spends considerably more time rehashing the “history” of Russia, Vladimir Putin and Trump than it does actually talking to Steele. Russia is deemed “a rogue state virus spreading westward with its villainy,” Putin a “KGB killer,” and Trump a “threat to American democracy.” In other words, it’s standard establishment media talking points.

Steele’s background is somewhat explored, but being the ever-diligent super spy that he is, Steele never explicitly states that he worked for MI6. I guess he doesn’t want to blow his cover.

What Steele actually says in this interview is of strikingly minimal impact. Thanks to Stephanopoulos’ anti-journalistic, anti-adversarial, deferential approach, no new ground is broken.

It’s well-known that Steele didn’t just compile the dossier, he actively pushed it to media outlets, in effect working to try and scupper Trump’s election campaign. The fact that he was ostensibly working for Democrats at the time certainly makes it appear as if he was a part of a wider disinformation/interference operation, but of course that’s a topic Stephanopoulos whistles past in this patty-cake chat.

Steele admits to no wrongdoing or error, despite the U.S. intelligence agencies “eviscerating” his findings after thorough investigation, and the FBI labelling him “untrustworthy.”

The issue of the “sources” Steele uses doesn’t get the attention it deserves either, as it’s reported that he only used one “key collector,” but Steele is quick to make clear it was “one collector” but not “one source.” That seems like a distinction without a difference.

As the documentary reports, that one collector was not a person in Moscow, but actually someone in Washington DC whose name is not revealed. The Justice Department Inspector General Michael Horowitz reported this person claimed that the information being given to Steele was “word of mouth and hearsay.” In other words, Steele was acting less as an intelligence expert seeking truth with his dossier than he was being a gossip columnist spreading rumor and innuendo.

Steele’s declaration, “I stand by the work we did, the sources we had, and the professionalism we applied to it,” is as devoid of substance as the rest of the interview.

The most damning aspect comes toward the end, and even that is soft pedaled, when Stephanopoulos asks Steele about both the dossier’s allegation that Trump counsel Michael Cohen went to Prague to meet with Russian intelligence and about the pee tape.

Cohen denies a Prague meeting ever took place, and since he has now flipped against Trump, one would assume he’s telling the truth. But Steele’s resolve remains, as he conjures up a wild scenario where Cohen is still lying because he wants to avoid being charged with treason.

Stephanopoulos, of course, lets this utter lunacy pass almost without notice. He could’ve asked Steele how exactly Cohen got to Prague, since his passport shows no travel to the Czech Republic. Or pressed Steele to provide details or at least a passable explanation for how that meeting could possibly have taken place? But he didn’t, he just smiled and continued playing footsie with Steele.

The ‘pee tape’ is the most salacious accusation in the dossier, and despite it never surfacing and no evidence it exists, Steele still stands by the claim…sort of. He says that the tape “probably does” exist but that he wouldn’t “put 100% certainty on it.”

When Stephanopoulos asks why the tape hasn’t come out, Steele replies that “it hasn’t needed to be released…because I think the Russians felt they’d got pretty good value out of Donald Trump when he was president.”

Look, I loathe Trump, always have and always will, but this sounds like the ravings of someone deeply infected with a ferocious case of Trump Derangement Syndrome, which is maybe why he is still taken seriously by the equally afflicted establishment media.

The more you know about Steele, the more readily apparent it becomes that he’s an absolute charlatan and bullshit artist masquerading as a serious intelligence expert. He’s no James Bond, he’s not even George Smiley. He’s more like a cross between Mr. Bean and Inspector Clouseau, who should, like this vacant and vacuous interview/documentary, be relentlessly ridiculed and righteously disrespected.