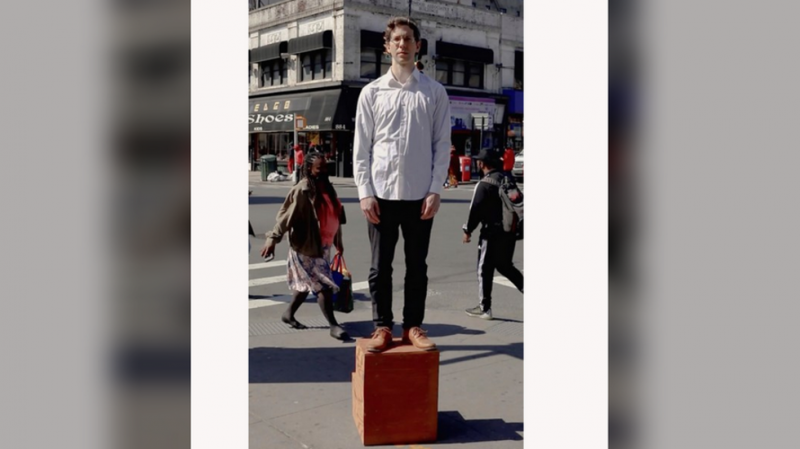 “White Male for Sale” – a short video of a white man standing on an auction block in New York City – was created by 56-year-old American artist Dead Scott and will be auctioned by Christie’s and the Cristin Tierney Gallery on October 1.

In an Instagram post advertising the auction, Scott boasted that he had “a prime white male of excellent quality” to sell.

“This is a really rare opportunity to buy a white male for sale. They don’t come up very often,” the artist added, claiming to be inspired by slavery’s “integral part of developing capitalism” and how enslavers “sought to turn people into commodities and make them fungible.”

Though the auction is not due to take place until October 1, White Male for Sale is already listed on Christie’s website alongside works of fine art, jewellery, and antiquities.

Describing his work – a perpetually looped one-minute video – for the website, Scott said that the man was “a generic white man, in typical middle class work shirt and pants” who is being passed by “Black Brooklyn.”

“This simple “substation” calls into question the whole history of slavery, capitalism and the ideology of white supremacy, with a particular relevance to the US,” he added.

Christie’s Senior Vice President Barrett White told the New York Post that “it was immediately clear” the piece “would be a major artwork” for the auction house “both for its contemporary and historical commentary as well as the fascinating combination of disciplines.”

NFTs, or non-fungible tokens, are non-replaceable digital assets which are connected to the blockchain. NFTs shot to popularity in 2020, with some assets selling for millions of dollars.

Scott is no stranger to controversy and even drew condemnations from former President George H. W. Bush and members of Congress for his 1989 piece “What is the Proper Way to Display a U.S. Flag?”

The piece – which featured the US flag laying on the ground in front of a book where visitors could express their own opinions on the flag – was called “disgraceful” by Bush and led to the Senate passing legislation to prohibit such treatment of the national symbol.