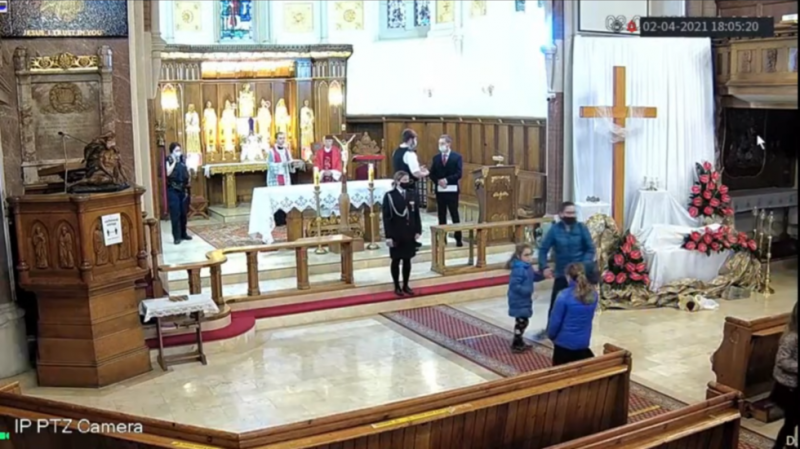 The footage, which was filmed at the Christ the King Polish Roman Catholic Church, in Balham, on Friday, showed Metropolitan Police officers disrupting the service before announcing, “Ladies and gentlemen, this gathering is unfortunately unlawful under the coronavirus regulations we have currently.”

“You are not allowed to meet inside with this many people under the law. At this moment in time, you need to go home,” an officer declared, warning that “failure to comply with this direction” could lead to a £200 fine or even arrest if worshippers refused to give their personal information.

“Though it is Good Friday, and I appreciate you would like to worship, this gathering is unlawful, so please can you leave the building now,” he concluded.

The video went viral around the world, and shocked Christians, other religious people, and atheists alike, who called the incident “disgusting” and “absolutely disgraceful”.

Human rights campaigner Luke de Pulford called the police response “disproportionate” and pointed out that the footage showed a police officer “wandering around the most sacred space in the church *on her phone*” as attendees made their exit.

“Have you any idea how offensive this is to Catholics?” he tweeted at Metropolitan Police, calling it “an act of extreme disrespect and ignorance”.

“How low can UK police sink,” commented one Twitter user, while photojournalist Nigel Howard wrote, “As a Jewish man, I am shocked by insensitivity of #police.”

The police response was even condemned by the former director of the US’ Federal Emergency Management Agency, Michael D. Brown, who served in President George W. Bush’s administration. Saying “tyranny reins in worshipping on Good Friday in UK”, he lambasted “government overreach” and went as far as calling the police to “refuse to enforce” the Covid regulations and “take a stand”.

In a statement, Wandsworth Borough Police claimed officers broke up the service because “some people were not wearing masks and those present were clearly not socially distanced”, though footage did show many attendees wearing masks.

“Understanding the sensitivity of the situation, officers engaged with the priest outside the church and were invited inside to address the congregation,” the statement continued, adding that no penalties were issued.

The church claimed in its own statement, however, that police “brutally exceeded their powers by issuing their warrant”, and claimed that all “government requirements were met”.

“We believe municipal police officials have been misinformed about the current guidelines for places of worship,” the church said, adding that it regretted “that the rights of the faithful have been wronged on such an important day for every believer, and that our worship has been profaned”.

According to UK government coronavirus guidelines, “Communal worship or prayer can be attended by as many people as the place of worship can safely accommodate in a way which complies with Covid-19 secure guidance and the law.”

The regulations say people must exercise social distancing, wear masks, avoid mixing with other households, or book a time slot to worship online.