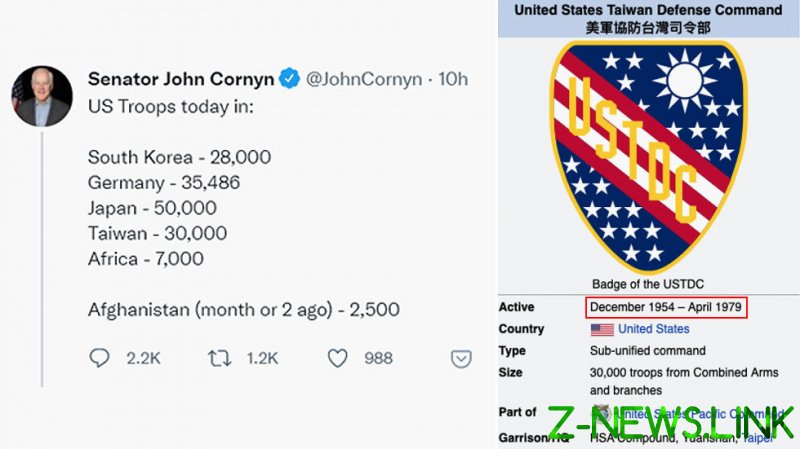 In a tweet in the early hours of Tuesday morning, United States Senator for Texas John Cornyn shared details of the number of American troops stationed overseas. Noting that there were only 2,500 US troops in Afghanistan a “month or two ago,” Cornyn was attempting to demonstrate that a small US presence had maintained stability in the war-torn nation.

But while his claims about Afghanistan’s stability may have been dubious, it was another assertion, from the same tweet, that caught people’s attention.

Cornyn’s revelation seemingly did not go down well in China, where Hu Xijin, the editor-in-chief of the Global Times and outspoken tweeter, demanded an explanation from the US and Taiwanese authorities.

“If it is true that the US has 30,000, or less than that number, soldiers stationed on the Taiwan island, Chinese military forces will immediately launch a war to eliminate and expel the US soldiers,” Hu wrote, sharing an image of Cornyn’s tweet.

However, the Taiwanese opposition party, Kuomintang (KMT), were among those who jumped in to correct the US senator, noting that the last US troops left the island nation on May 3, 1979.

Others were less concerned about the threat of imminent war and instead mocked the US senator for his wildly inaccurate assertion. TV host Mehdi Hasan said on Twitter that people have been “dunking” Democrat Rashida Tlaib for confusing ‘Taliban’ with ‘mujahedin’ but what about this GOP senator believing there are 30,000 US troops in Taiwan.

Writer Charlotte Clymer also tweeted her shock, stating that there haven’t been US troops stationed in Taiwan for over four decades, yet this man is a member of the US Senate Select Committee on Intelligence. “Also: Africa is not a country,” she added.

Political commentators also chimed in with their condemnation. “30,000 troops in Taiwan… Good grief. Dude, retire,” wrote analyst Robert E. Kelly, while Seth Masket asked if Cornyn was referring to the US Taiwan Defense Command which disbanded four decades ago.

Others also suggested that Cornyn had Googled US troops in Taiwan, but hadn’t fact-checked his findings. One person, sharing images from a Google search, told the senator to click through to Wikipedia to get the full story.

Cornyn has served as senator for Texas since 2002. On Monday, as chaos grasped Kabul, Cornyn delivered a speech at the Camp Swift Training Center claiming the drawdown of troops in Afghanistan was a huge error by President Joe Biden. He claimed that there is no question that Al-Qaeda, as well as ISIS and other terrorist organizations, will use the events as an opportunity to re-establish themselves.