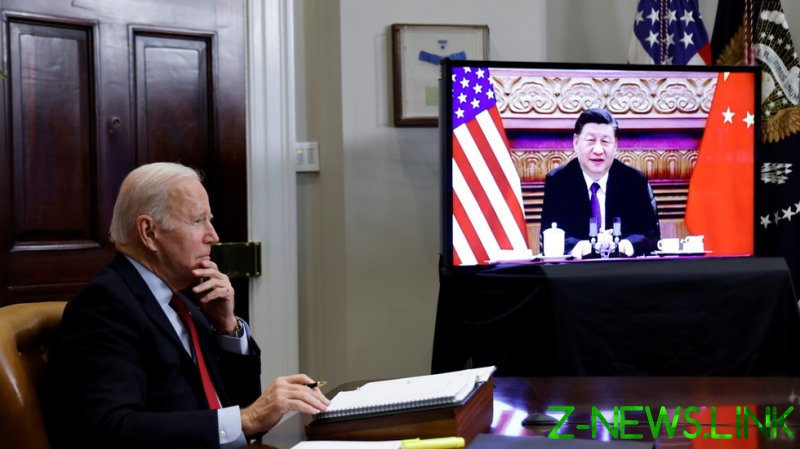 The two leaders sat down for virtual talks on Monday to discuss a range of issues, with both Xi and Biden opening the meeting on a cordial note. Calling his US counterpart an “old friend,” Xi argued that a “healthy and stable” relationship is needed to address global challenges like the Covid-19 pandemic and climate change, noting that he would like to steer US-China ties in a “positive” direction, according to Chinese state media.

“As the world’s two largest economies and permanent members of the UN Security Council, China and the United States need to increase communication and cooperation,” Xi said, adding that the two nations should “respect each other” and seek to “coexist peacefully.”

While the Biden administration has repeatedly declared that the US is in stiff “competition” with China, the president told Xi that it is their responsibility to ensure the two powers don’t “veer into open conflict,” calling to establish “common-sense guardrails” to take war off the table, Reuters reported. He nonetheless vowed to address some contentious issues, including alleged rights abuses by Beijing and other areas of concern in the Asia-Pacific region – where Washington continues to deploy warships and other military hardware after Biden’s Pentagon named China as its top priority.

Expected to last several hours, the virtual meeting is the most extensive between Xi and Biden since the latter took office in January, and follows a tense high-level summit in Alaska last March that saw the two sides trade barbs in public. While recent military talks appeared to do little to improve ties, another sit-down involving US National Security Advisor Jake Sullivan and the head of China’s Central Foreign Affairs Commission, Yang Jiechi, was hailed as “substantive and constructive” by a US official, who said it set “a different tone than Anchorage.” Monday’s talks between Biden and Xi came as a result of that meeting, which was held behind closed doors in Zurich, Switzerland.

READ MORE: Pentagon says world will have three ‘great powers’ – and US will be ‘challenged’

Though Biden previously spoke of his strong “friendship” with Xi while serving as vice president under Barack Obama, and Xi has repeatedly referred to him as an “old friend,” Biden has scaled back some of that warmth since becoming head of state. When asked by a reporter if he would reach out to his counterpart as an “old friend to old friend” in June, Biden shot back “Let’s get something straight: We know each other well; we’re not old friends. It’s just pure business.”