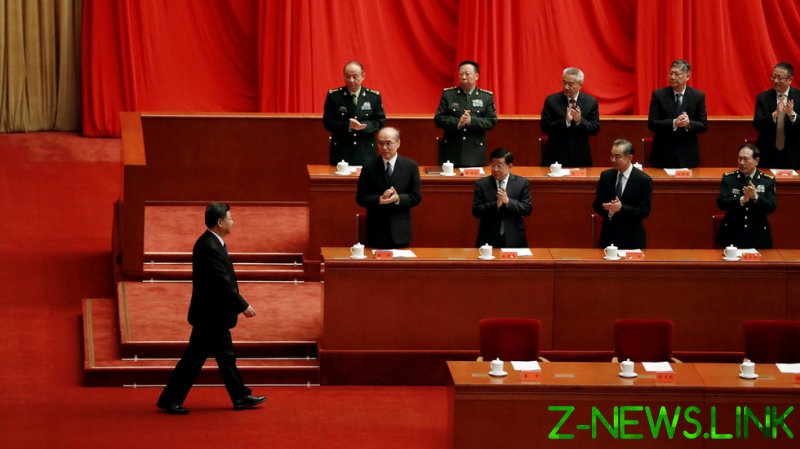 “Taiwan independence separatism is the biggest obstacle to achieving the reunification of the motherland and the most serious hidden danger to national rejuvenation,” Xi said in a speech at Beijing’s Great Hall of the People on Saturday.

“Realizing national reunification by peaceful means best serves the interests of the nation as a whole, including our brethren in Taiwan,” the President said.

Xi, who had earlier warned that China wouldn’t hesitate to use force against Taiwan and, in July, promised to “smash” any attempts at establishing formal independence made by the island of 25 million, struck a softer tone in this speech.

However, he warned foreign nations about meddling in the Taiwanese issue, saying it was “purely China’s internal affair and does not allow any external interference.”

The address was delivered on the 110th anniversary of the revolution that concluded in the overthrow of imperial rule in China in 1911. Taiwan celebrates National Day on the same date, with the uprising there having led to the creation of the Republic of China (ROC). The ROC originally occupied territories on the mainland, but its leadership was forced to flee to the island after a civil war with the communists in 1949. Taiwan has been self-governed since then, but has never formally declared independence from China, with Beijing, under its ‘One China’ policy, viewing it as a breakaway territory.

The office of Taiwanese President Tsai Ing-wen reacted to Xi’s words by reiterating that the island considered itself a sovereign independent state. “The nation’s future rests in the hands of Taiwan’s people,” it insisted.

Taiwan’s Mainland Affairs Council, which handles the island’s relations with Beijing, retorted with an even harsher statement, urging China to “abandon its provocative steps of intrusion, harassment, and destruction” and to return to the negotiating table.

Tensions have been running high between Taipei and Beijing of late, with Chinese warplanes making almost 150 incursions into Taiwan’s air defense zone since the start of October. However, those flights have ceased in the past couple of days.

Meanwhile, reports have emerged of US special operations forces secretly training Taiwanese troops for months to prepare them to counter China. Washington has been maintaining unofficial ties with Taipei and supplying weapons to the island, despite recognizing Beijing as the sole legitimate authority in China since 1979.

On Friday, former Australian prime minister Tony Abbott paid an unofficial visit to Taipei, assuring the local authorities that both Australia and the US would assist Taiwan if conflict with China escalated.