Home / WORLD / China’s space station means lift-off on a new battle for the galaxy… and just like on Earth, Beijing has America worried

China’s space station means lift-off on a new battle for the galaxy… and just like on Earth, Beijing has America worried 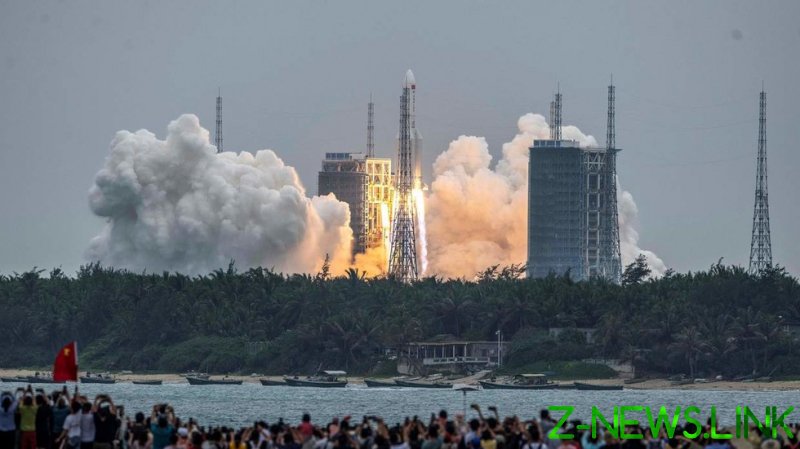 On Thursday, China sent the core module of its first-ever space station, the Tianhe – or ‘Harmony of the Heavens’ – up into orbit. It’s long been under development, and marks a huge breakthrough in the country’s space program.

A series of follow-up missions will seek to assemble the new station, which may become Earth’s only one, as the International Space Station is likely to be retired in the next few years. Ironically, Tianhe’s launch comes a decade after Barack Obama’s administration excluded Beijing from participating in the ISS, an event which undoubtedly spurred its development.

The mission is yet another sign that, despite being a late starter, China is rapidly catching up with the US on outer space, with its Chang’e-5 program having successfully brought back rock samples from the moon at the end of 2020. Earlier this week, of course, Joe Biden framed the situation between Washington and Beijing as the “competition to win the 21st century,” and a tech war will be a big part of this, with the president also vowing to maintain America’s dominance in this area. It’s clear this will involve outer space.

China’s space ambitions are only just getting started. Beijing only sent its first astronaut into space in 2003. In contrast, next week will mark 60 years since the United States sent Alan Shepard into space. Despite that huge gap, Beijing’s space program is moving at tremendous speed. In the coming month or so, China will land a rover on Mars, matching America’s achievement. In 2019, it became the first country to ever land on the far side of the moon. Now it’s planning another moon mission, Chang’e-6, for 2024, in which it aims to land on the Lunar South Pole. This is designed to pave the way for a future lunar base, one it has signed a Memorandum of Understanding with Russia to build.

You may wonder why this is all happening so quickly. Is Beijing competing in outer space purely due to pride and ideological prestige, or is there some grander strategic objective at hand? To answer this fully, it’s important to understand that the first space race amounted to humanity’s ‘baby steps’ into the cosmos, something which lay at the heart of the struggle between the US and the Soviet Union.

However, the talk of moon bases – something NASA is also planning – indicates that this space race is ultimately about establishing man’s presence there for the first time, adding a military, economic, and strategic dynamic to the equation. The stakes are higher, which explains the recent decisions by the US and the UK to set up ‘Space Commands’.

The UK government website gives us some clues as to where this is heading: “Space, and our assured access to it, is fundamental to military operations. Loss of, or disruption to, the space domain, will impact our ability to undertake the majority of Defence Tasks, and has the potential for significant effect on civilian, commercial and economic activity. The threat from adversaries in this rapidly evolving operational domain is real and it is here now.”

Outer space is a new frontier, and unbeknownst to the world, it is again taking centre stage in a geopolitical struggle between the US and another power that it perceives as vying for world dominance. Yet it will not just be for show, as was the case for much of the old space race, but will instead impact the balance of power between the two countries.

Given this, the establishment of the Tianhe space station is a massive development. It will be a scientific asset to China, but also a strategic one, and it is for that very reason the US never wanted Beijing to be a part of the ISS.

Obama’s decision back in 2011 marked the start of the foreign policy logic in Washington that China is a competitor, and that its development ought to be contained by attempting to exclude it from strategic technological projects. Donald Trump and Joe Biden have aggressively followed this course, as has been seen with their treatment of Huawei. And yet the ISS decision has arguably backfired, with China creating its own space station and the ‘new space race’ lifting off.

China is pioneering a space program that is not only advancing very quickly, but successfully. This will almost certainly put NASA to the test, and it is a competition which, as we saw previously, is likely to massively broaden our perspective and understanding of the universe around us.