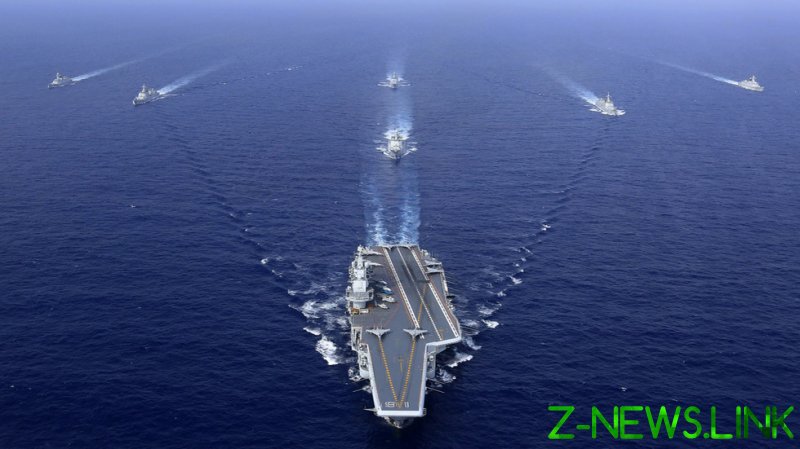 The world’s largest naval force, the People’s Liberation Army Navy (PLAN), might soon be reinforced with a new aircraft carrier. The huge vessel, which is more than 1,000 feet (over 300 meters) long, will add to China’s two seagoing airbases. Commonly known as the Type 003 and yet to receive a formal name, it is believed it will help Beijing exercise control over the Pacific. Fitting several dozen planes, helicopters, and support aircraft, analysts believe the powerful addition to the Chinese army will be at least equal to its US counterparts’ capabilities.

Final touches are being made to the super carrier at the Jiangnan Shipyard on the Yangtze River, the American Center for Strategic and International Studies (CSIS) revealed this week. “Based on available information and observed progress at Jiangnan, the authors estimate that the Type 003 will launch in roughly three to six months,” its report said.

The US analysts explained that they had received the latest satellite imagery of the Chinese construction site from a commercial firm. According to the high-quality photographs, steady progress has been made on the carrier’s construction throughout the year, with its main external components now nearly complete.

Two large openings in the deck were recently sealed shut, meaning engines had been inserted in the hull. The flight deck, designed to operate heavier aircraft than China’s older carriers, is already fitted with a control tower island, with radars and elevators expected to be added soon. Moreover, the Type 003 might be equipped with a new launch system, similar to the ones developed for the US Navy carriers, the report suggests.

The advanced aircraft carrier was commissioned by the government in late 2019, and is expected to enter service by 2024, according to the Pentagon’s estimates. In its 2021 annual report to Congress on China’s military developments, the US Department of Defense acknowledged Beijing’s growing capabilities, saying China’s navy “is an increasingly modern and flexible force that has focused on replacing its previous generations of platforms that had limited capabilities in favor of larger, modern multi-role combatants.”

At the moment, the Chinese navy has an overall battle force of approximately 355 ships and submarines, according to the US military. The national air force has some 2,250 combat aircraft, including strategic bombers and fighters.