China sails capital ship past Taiwan ahead of US talks 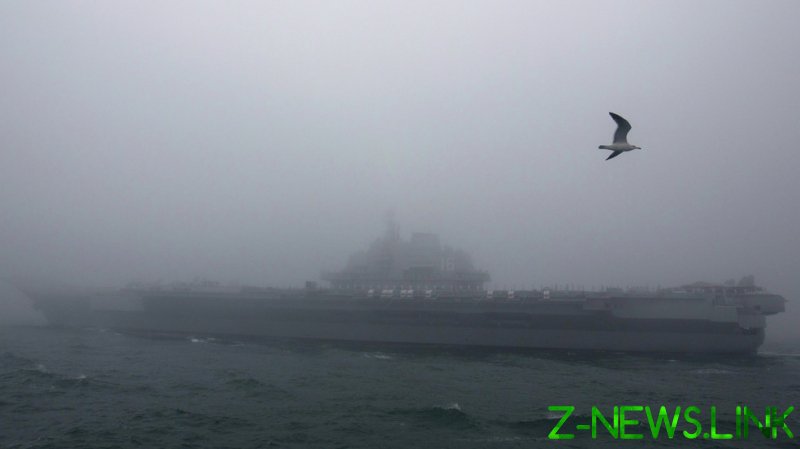 Just hours before the scheduled phone call between US President Joe Biden and his Chinese counterpart Xi Jinping, China sailed its aircraft carrier Shandong through the Taiwan Strait. The Foreign Ministry in Beijing, however, says the two are unrelated and Western media are being too “sensitive” about it.

The Shandong was accompanied by another Chinese surface ship and transited the strait about 12 hours ahead of the Biden-Xi call, Reuters reported on Friday citing an anonymous source. It was reportedly followed at a distance by the USS Ralph Johnson, an Arleigh Burke-class guided missile destroyer of the US Navy.

The photo of the carrier, captured by a passenger on a commercial flight passing overhead, has made the rounds on social media. It shows the Shandong with no airplanes on her deck.

Asked about the timing of the transit, Chinese Foreign Ministry spokesman Zhao Lijian told Reuters on Friday that he was “not aware of the specific situation.”

“I’m sure the aircraft carrier has routine training arrangements,” Zhao added. “One shouldn’t link this with the communication between the Chinese and US heads of state. Perhaps you are being sensitive, not the Taiwan Strait.”

Biden spent nearly two hours on the call with Xi, among other things addressing the differences between Washington and Beijing over Taiwan. The island has been ruled by the US-backed nationalists who fled the mainland following their 1949 defeat in the Chinese civil war. Beijing considers it Chinese territory and insists on its peaceful reintegration, protesting the recent increase in US weapons sales to Taipei.

One of the major items on the agenda, according to the White House and the State Department, was the US demand that China denounce Russia over the conflict in Ukraine and agree to abide by the US-led sanctions, something Beijing has rejected.

Neither the Chinese Defense Ministry nor the People’s Liberation Army Navy have made any official statements about the Shandong’s trip. The Chinese outlet Global Times cited a PLAN commander who said that the carrier was “likely” on her way back to the shipyards in Dalian for maintenance, and just taking the shortest route home.

The carrier has made multiple transits of the straits before, twice in 2019 and again in December 2020.

Named after the heartland province that was the birthplace of Confucius, the Shandong is China’s first domestically-built aircraft carrier, commissioned in 2019. As the template for its design the PLAN used the Liaoning, an unfinished Soviet Kuznetsov-class ship that Beijing had bought unfinished from Ukraine in the 1990s and commissioned in 2012.