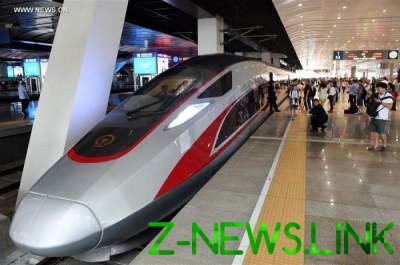 The speed of the trains reached 350 km/h.

“With the capital South station in Shanghai went train “Fuxing” (Revival) with a maximum speed of 350 km/h”, – says the publication.

Increasing the speed of trains reduced the journey time between the two cities to 4 hours and 28 minutes. Starting Thursday in both directions between Beijing and Shanghai will be running 14 trains, “Fuxing”. “These trains are so popular that tickets for today were sold out a week ago”, – said the representative of the Chinese railway Corporation Huang Xin.

To date, the total length of high speed railway lines in China reaches 22 thousand km. According to this index, China leads the world. In particular, the line Beijing-Shanghai most congested in China high-speed railway line, on average, annually carries over 100 million passengers. Currently, the “Fuxing” is the high-speed train, operated by private organizations.

Earlier it was reported that China aerospace Corporation CASIC (China Aerospace Science and Industry Corp) has announced a development of its own Hyperloop, which will appear in Wuhan. It is expected that the speed will be 1000 km/h.