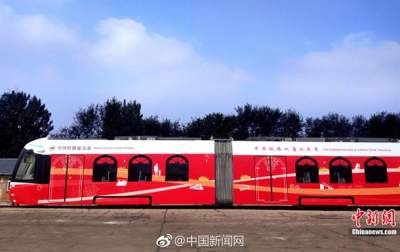 In Tangshan city of Hebei province in northeast China in commercial service has launched a tram running on hydrogen fuel.

The tram doesn’t emit any pollutants. The reaction temperature inside the fuel cell below 100 degrees Celsius, so nitric oxide is not formed. The only departure from the running engines is water.
The distance between the floor of the carriage and the rails is 35 inches, for easy boarding.

The refill lasts about 15 minutes, fuel will last for 40 kilometers. The maximum speed of the tram is 70 km / h.

Cheap technology hydrogen fuel was introduced in September 2014 by the Swiss scientists. In December of the same year, the Japanese Toyota Motor Corporation started the serial production of cars running on hydrogen.