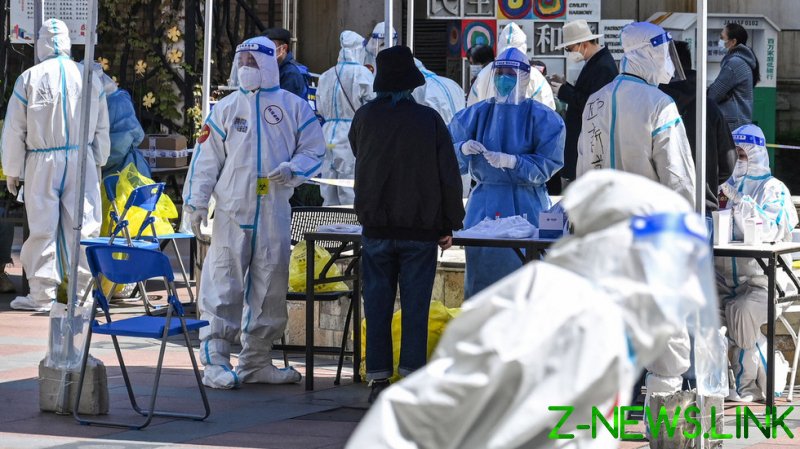 China’s People’s Liberation Army (PLA) deployed more than 2,000 military medics to Shanghai on Sunday to help their civilian colleagues test the city’s entire population amid a Covid-19 outbreak. Reports confirming that the army has been called in appeared in a PLA newspaper.

The military reinforcements came on top of over 10,000 medical professionals from two adjacent provinces and Beijing who have recently arrived in the metropolis, as reported by the Chinese state media.

The deployment is described as the country’s largest public-health response since the first-ever documented Covid outbreak in the city of Wuhan in late 2019. Back then, more than 4,000 military medics were called in.

Shanghai authorities have set the ambitious goal of conducting throat swabs on all 26 million residents of China’s largest city and major financial hub.

Shanghai has become one of the country’s biggest Covid hotspots in recent weeks, with authorities initially opting for partial lockdowns affecting various parts of the city separately. However, as the measures in place did not appear to contain the spread of the virus, the city last Monday introduced a two-stage lockdown, which has since been expanded to effectively confine most residents to their homes.

With 8,581 asymptomatic and 425 symptomatic Covid-19 cases reported on April 3, the outbreak would likely have been deemed a relatively insignificant one, had it happened elsewhere; however, the Chinese government’s so-called ‘dynamic zero’ Covid strategy calls for tough measures even if the caseload is low. The policy’s key principles are testing, tracing and quarantining all positive cases and their close contacts.

On Sunday, Shanghai residents were told to self-test and report any positive results, with nucleic acid tests planned for Monday all across the city.

Those who test positive for Covid in Shanghai are being placed in quarantine centers. City authorities have converted hospitals, gymnasiums, apartment blocks and even the Shanghai New International Expo Center into temporary quarantine facilities.