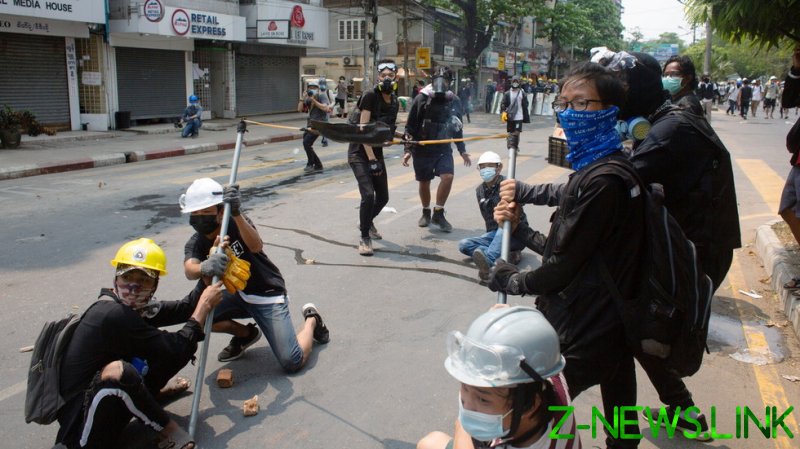 The figures provided by the Assistance Association for Political Prisoners (AAPP) would make it the bloodiest day of the protests, which have engulfed Myanmar since a military coup on February 1.

Demonstrators armed with sticks and knives faced off with police in Hlaingthaya, the industrial area of Yangon. The officers responded by firing shots at the crowd, which led to at least 22 people being killed, according to AAPP.

Army-run broadcaster Myawadday insisted that the police resorted to lethal force after some 2,000 demonstrators set four garment factories and a fertilizer plant ablaze, while also preventing fire trucks from reaching them.

China’s embassy in Myanmar complained earlier that Beijing-owned factories in the Hlaingthaya district “were looted and destroyed” during the protests. “Many Chinese staff were injured and trapped,” it said in a Facebook post, describing the events as “very severe.”

Chinese nationals have been warned about the risks they face in the country, the embassy added. It urged the authorities “to take effective measures to stop all acts of violence, punish the perpetrators in accordance with the law and ensure the safety of life and property of Chinese companies and personnel in Myanmar.”

Anti-Chinese sentiment has been on the rise among demonstrators over what they see as a lack of condemnation of the coup from Beijing, especially compared to the West, part of which has already sanctioned the military government.

Amid the deteriorating security situation, a local military commander made the decision to impose martial law in Hlaingthaya.Yangon wasn’t the only location where tensions ran high on Sunday, with at least 16 demonstrators killed in various parts of the country.

In the city of Bago in central Myanmar, a police officer died after receiving a chest wound, with three of his colleagues also being injured.

State TV has blamed the demonstrators for tossing rocks and using catapults to attack the officers. It also said that reports of guns carried by some in the crowd were being verified.

It’s the second police officer killed during a month-and-a-half of protests in Myanmar. People have been taking to the streets despite the violent crackdown by the security forces, demanding the release of pre-coup leader, Aung San Suu Kyi, who was arrested over claims of election fraud. They say they don’t believe that the military commanders will keep their promise of holding a free and fair vote.