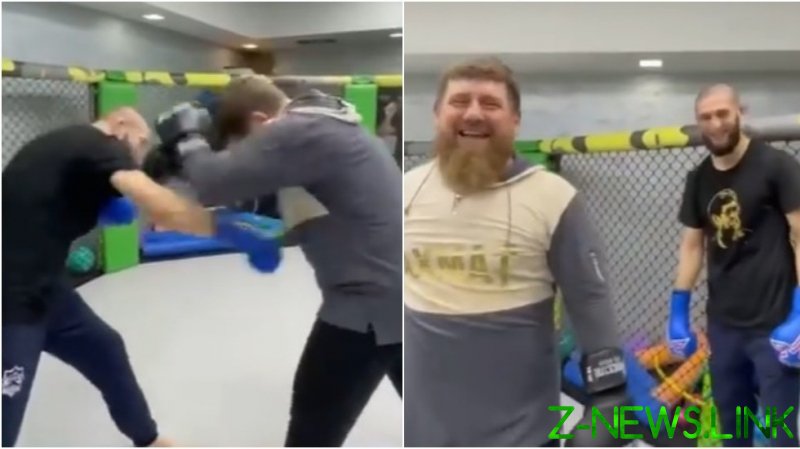 Chimaev posted the clip to his Instagram account on Saturday, in which he is seen dancing around the cage and exchanging a series of light blows with the head of the Chechen Republic. In a couple of moves, MMA fan Kadyrov goes on the offensive and then defends a counter attack from Chimaev.

The session ends on Kadyrov play-pummeling Chimaev in the corner, before the pair hug and enjoy a warm fist-bump between a few seconds of Kadyrov talking to the camera.

Kadyrov’s blows could be thought of as punishment after Chimaev reportedly crashed a luxury car he had been gifted by the local leader.

Pictured with the Mercedes earlier in the day this week, and wishing his following of 2.4 million fans a good morning, a Chechen news account later posted a video of the car with its front badly damaged from an apparent collision with a barrier.

A crowd of people and what looked like emergency services were also in attendance, with a caption reading: “Khamzat Chimaev had an accident yesterday [but Khamzat] himself was not injured.”

Kadyrov has been credited with being behind Chechen-born Chimaev’s continuation in MMA after a string of bad experiences.

Falling ill to Covid, ‘Borz’ had a scheduled fight with Leon Edwards canceled and posted a message saying that he felt he was “done” with the sport in March.

Kadyrov announced he had talked Chimaev, 27, out of calling it a day, though, on behalf of “millions of fans in Russia”.

“Khamzat said that the recovery from illness is slow and, trying to be honest and frank with the fans, he decided not to give them hope,” Kadyrov revealed at the time.

“If fans need to wait for his return, then we will all look forward to his entry into the octagon with trepidation and patience.”

But while veteran fan favorite Nick Diaz is being lined up as a potential foe for the undefeated Chimaev in his much-anticipated comeback to action, manager Ali Abdelaziz is advising against finalizing the match-up.

“I respect Nick Diaz, I think he’s done a lot in this sport but if this fight happens, everybody should go to jail,” Abdelaziz boldly stated in an interview with ESPN MMA.

Chimaev, who now fights out of Sweden after emigrating to the country as a teenager, racked up three victories in the space of just 66 days after making his UFC debut last year, and boasts a record of 9-0 in professional MMA competition.