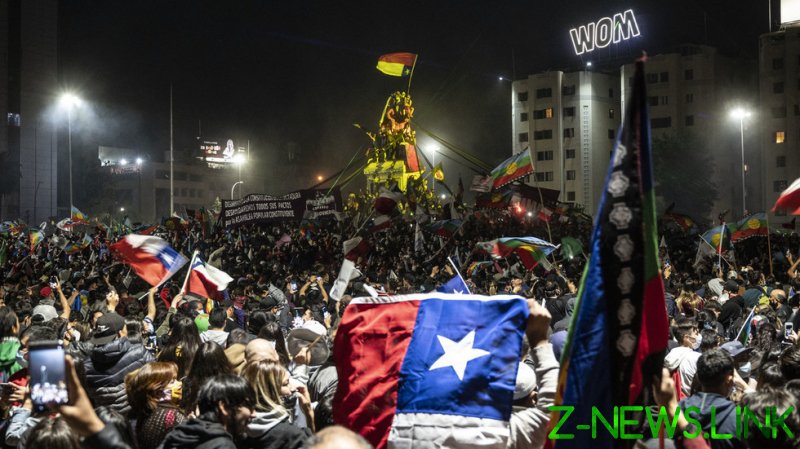 On Sunday, almost exactly a year after protests over inequality erupted in the country, Chileans voted in a landslide to adopt a new constitution that will ditch the one enshrined in 1980 under the military dictatorship of General Augusto Pinochet.

As Robert Packenham and William Ratliff wrote in a 2007 Hoover Institution paper, “The first country in the world to make that momentous break with the past – away from socialism and extreme state capitalism toward more market-oriented structures and policies – was not Deng Xiaoping’s China or Margaret Thatcher’s Britain in the late 1970s, Ronald Reagan’s United States in 1981, or any other country in Latin America or elsewhere. It was Pinochet’s Chile in 1975.”

This system was adopted in plain defiance of the will of Chilean voters who democratically elected socialist leader Salvador Allende as president in 1970. Washington, which had long been subverting Allende’s candidacy, wanted Chile to remain under its thumb and not pursue an independent development path or foreign policy direction, which an Allende presidency guaranteed.

During his first year in office, real wages increased dramatically as his administration began to nationalize key industries. However, the Chilean economy was hit hard by aggressive US sanctions imposed by former President Richard Nixon. Inflation hit an annual rate of 150 percent in 1973, which added serious internal pressure to Allende’s government and set the stage for the CIA-backed coup in September of that year that installed General Pinochet – the commander-in-chief of the military – into power.

It was the ‘Chicago Boys’, a group of Chilean graduate students who were invited to study at University of Chicago in the 1950s directly under neoliberal mastermind Milton Friedman and his protege, Arnold Harberger, that crafted Pinochet’s economic policies, exacerbating inequality like never before seen. It was they that helped create the Pinochet-era constitution in 1980.

This era of Chile’s history was a social experiment for the theoretical work of Friedman and his supply-side contemporaries that promised to create sustained economic growth and “trickle down” this newly created wealth to workers.

The self-evident failure of these policies came in 1982 when the gravest economic crisis the country faced since the Great Depression caused GDP to fall 14.3 percent and unemployment soared to 23.7 percent. While it is attributed by some to the Latin American debt crisis of the 1980s, Chile’s disproportionate backslide during this time was unique amongst its peers and its radical shock therapy was no doubt to blame.

Even after the crisis subsided and the country’s growth began to outpace its peers in what Milton Friedman called the “Miracle of Chile,” this growth was achieved due to a less radical version of the neoliberal program in a sort of mixed system during the center-left Concertación governments between 1990 and 2010.

While economic growth has accelerated and inequality has decreased to some extent, Chile remains one of Latin America’s most unequal societies and prevailing policy does little to address it, not in the way Chileans obviously want. Poverty still remains, the general cost of living is rising and top earners continue to pull in the lion’s share of newly generated wealth. Chile’s inequality issues, as voters understand, are systemic.

Even by Friedman’s own analysis of the country’s history his professed policies were indeed a failure because of their rejection in Sunday’s referendum. He lauded the economic program of Pinochet’s regime, though claimed to have less admiration for its political repression. It was the freeing of Chile’s markets and the reorientation of the economy toward privatization that allowed democracy to flourish when Pinochet exited in 1988 after failing to win a referendum on the extension of his presidency, according to him.

Yet it is now democracy, which had doubtless already existed in Chile before Pinochet came to power, that has undone the skeleton of the neoliberal political program. To be sure, reactionary elements exist within Chile and the exact details of a new constitution are yet to be seen. It is foreseeable that these elements could advance a similar or even more radical neoliberal program in a new constitution, but the results of Sunday’s referendum speak to the success of the social movement that pushed for the vote in the first place – the movement against neoliberalism. They are the ones poised to lead on the new proposals.

The worldwide movement against neoliberalism has actually won two recent victories in Latin America: Sunday’s constitutional referendum and the victory of Luis Arce and the Movement for Socialism (MAS) in Bolivia’s election on October 18. The former represents the wholesale rejection of neoliberalism while the latter represents the fact that replicating the 1973 coup that created the conditions for neoliberalism to first enter the material world cannot happen again. The similarities between what the US-backed interim regime of Jeanine Añez tried to make happen in Bolivia this year and what the Pinochet regime did are extensive.

Neoliberalism has remained the world’s preeminent economic and ideological paradigm since at least the 1970s, but as one popular Chilean protest slogan states, “Neoliberalism was born in Chile and will die in Chile.” What happens in the adoption of a new Chilean constitution may be a useful barometer for what may be the world’s next ideological realignment, just as it was in 1980.