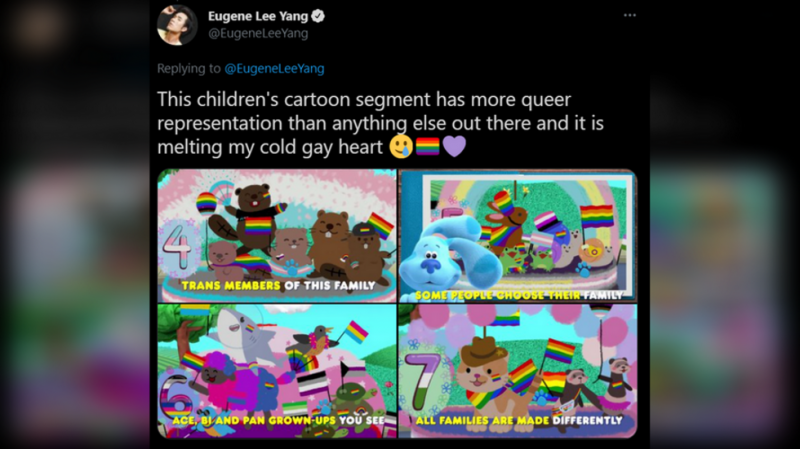 Published on the show’s YouTube channel, the video, titled “The Blue’s Clues Pride Parade Sing-Along,” features a cartoon version of Nina West, an American drag queen, who leads the children in a song set to the tune of ‘The Ants Go Marching’. Floats with animals waving rainbow and transgender flags pass by on the screen as West sings.

The song features words such as “queer,” “trans,” “bi,” as well as “pan” and “non-binary,” with the lyrics displayed at the bottom of the screen so that children can sing along.

For example, as a group of beavers decked out in LGBTQ and trans regalia ride by, the drag queen sings:

One of the cartoon beavers is shown with visible “top scars” – scars from surgery that transgender men undergo to remove breast tissue. The detail was confirmed by Snopes, which “fact-checked” whether Nickelodeon intended for the pixelated lines on the beaver’s chest to represent such scars.

The video ends with West wishing everyone a “happy Pride Month.”

The singalong was applauded by many, with fans of the clip describing it as “cute,” “heart-warming” and inclusive.

But there were plenty of others who criticized putting such content in a cartoon meant for small children.

One commenter described it as “indoctrination,” while another said it was a sign of the “end times.”

Another reply said that content related to gender identity shouldn’t be “pushed” on children who simply want to watch cartoons.

The criticisms led some to claim that “right-wingers” were overreacting to the animated parade.

Pride Month, which begins on June 1, has prompted many brands and companies, some of which market to children, to show their support for the LGBTQ community. Last month, Kelloggs released a special edition “Together With Pride” cereal, featuring rainbow-colored hearts “dusted with edible glitter.”