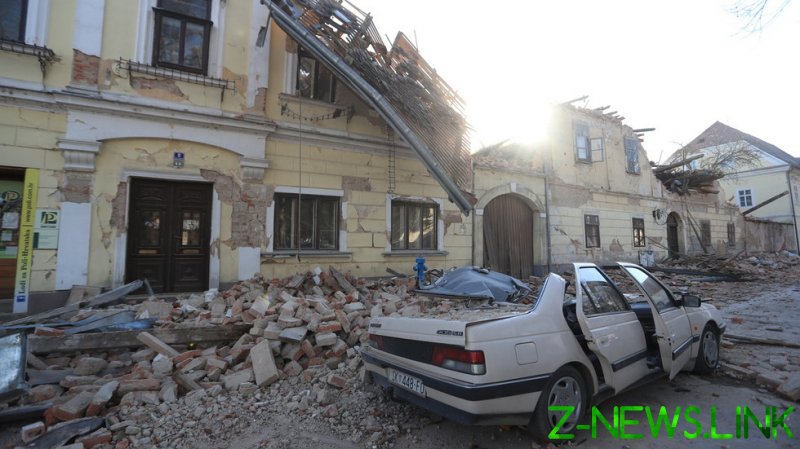 The area around the Croatian capital of Zagreb was struck by an earthquake of magnitude 6.3.

Besides structural damage, some areas in Zagreb reportedly experienced an electrical blackout, and the whole city was having issues with telephony and the internet. During the earthquake, many citizens ran outside in fear.

Dozens of Twitter users shared pictures purportedly showing the aftermath of the quake. The images depict buildings with their roofs completely collapsed and walls partially destroyed.

The town of Petrinja was one of the places hit hardest by the earthquake. One child died during the quake, according to local media.

Petrinja’s Mayor Darinko Dumbovic told reporters that the emergency services are working on pulling people out of obstructed cars, but the number of injuries and deaths is not yet known. According to the mayor, two kindergartens collapsed in Petrinja – fortunately, however, one of them was empty, and children were safely evacuated from the second.

Croatian Prime Minister Andrej Plenkovic has announced he will go to Petrinja to personally assess the situation.

The quake also hit some parts of neighboring Slovenia, prompting the country to shut down its nuclear power station as a precaution.

Some Twitter users even shared footage of the massive earthquake escalating during a National Assembly session in Slovenia, apparently prompting the legislators to evacuate.

Tuesday’s tremor is the second in what now seems to be a cataclysmic chain of events, after the region was struck by a 5.2 earthquake on Monday. Earlier this year, in March, a 5.3 hit Zagreb, resulting in 27 people being injured and one being killed.