Home / WORLD / Child brides & terrorist ties? US struggles to identify many of 100k+ Afghans it evacuated from Kabul

Child brides & terrorist ties? US struggles to identify many of 100k+ Afghans it evacuated from Kabul 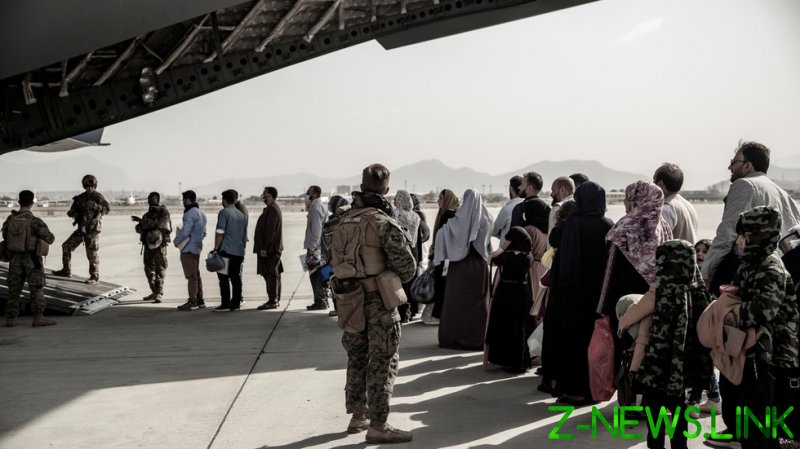 President Joe Biden had declared the Kabul airlift an “extraordinary” success, pointing to 124,000 people extracted from Afghanistan following the Taliban takeover. Fewer than 6,000 were US citizens, however, and most of the Afghans who made it onto the evacuation flights were not the translators that worked with NATO troops or local employees of Western NGOs – many of them remained in Kabul and are currently in hiding.

Secretary of State Antony Blinken told reporters on Friday that the administration was “still figuring out” who all the evacuees were, but claimed up to 80% of them were “at risk” Afghans.

Meanwhile, internal State Department documents leaked to CNN and AP indicated concern by US officials over what looked like sex trafficking – reports of underage Afghan girls listed as “wives” of much older men.

Diplomats in Doha in the United Arab Emirates – where Afghan evacuees were processed – referred to “numerous” incidents of this nature. Officials at Fort McCoy in Wisconsin, where the evacuees were brought, sought “urgent guidance” in the matter of these child brides, AP reported on Friday, citing internal documents in their possession. Sources also spoke of a report from Abu Dhabi that documented claims by some of the girls that they had been raped.

“Intake staff at Fort McCoy reported multiple cases of minor females who presented as ‘married’ to adult Afghan men, as well as polygamous families,” says a situation report by the Afghanistan Task Force, dated August 27 under number 63, as quoted by AP. “Department of State has requested urgent guidance.”

The reports attracted the attention of Senator Ted Cruz (R-Texas), who accused the Biden administration of importing “a human rights catastrophe” into the US and conducting “literally child trafficking.”

Cruz later issued a statement accusing the White House of rushing to bring the evacuees into the US, threatening the security and health of Americans by not screening them for Covid-19 or potential terrorist ties, and even incentivizing abuse.

“There have been multiple cases of child brides and polygamous families from Afghanistan arriving at military bases here in America as part of their botched evacuation,” Cruz said. “Every Biden-Harris official linked to this disgrace should and must be held accountable.”

Cruz’s adviser Omri Ceren also highlighted other issues, such as evacuees getting flagged for links to terrorist groups or the Taliban – the US seems to not differentiate between the two – and an unknown number of evacuees testing positive for the coronavirus upon arrival.

According to NBC News, of the 30,000 Afghans brought to the US so far, about 10,000 needed “additional screening.” The 100 flagged for possible terrorist ties were among that group, and two of them were flown out to Kosovo for further vetting. The US-backed government in Kabul was the first to recognize the breakaway province of Serbia, when it declared independence in 2008 in violation of UN rules.

Earlier in the week, Breitbart reported that at least one of the refugees was actually a convicted rapist, deported from the US in 2017, but now back as part of the airlift. NBC’s sources said Friday that “other evacuees” currently in the Washington, DC area had been deported from the US for criminal offenses, and that the authorities were now trying to decide what to do with them.

“If and when we obtain derogatory information, we know how to address that,” Homeland Security Secretary Alejandro Mayorkas told reporters on Friday. “Those muscles are very well exercised,” he said, adding that “we do feel confident in the safety and security of the American people.”

Other states taking in Afghan refugees also reported problems. German authorities have so far flagged three of the refugees with forged documents and four who had been previously deported for “serious crimes,” Interior Minister Horst Seehofer told reporters on Friday.

Meanwhile, hundreds of journalists working for US government-funded outlets had been left behind in Afghanistan, as well as many current and former interpreters working with US troops over the years – including a man named Mohammed, who helped rescue then-senators Joe Biden, John Kerry and Chuck Hagel when their helicopter went down in a blizzard in 2008.