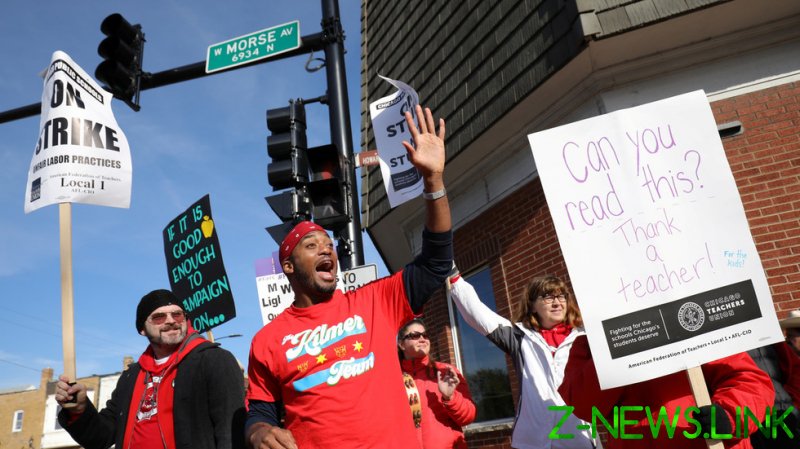 Some 1,000 new workers will be paid $15 an hour to supervise students in classrooms while their teachers give their lessons remotely, on a computer screen, according to a job posting by the school district. Other duties will include doing health screening of students as they enter school, delivering supplies, contacting parents and supervising lunchrooms and recess.

The de-facto monitors will receive no benefits and will make gross pay of about $100 a day, a far cry from the median of around $75,000 per year earned by Chicago teachers, who also can retire with pensions that pay out upward of $73,000 annually.

Although the “babysitting” duty tops the list of the responsibilities on the job posting, Chicago Public Schools human resources chief Matt Lyons sought to assuage concerns, telling the Chicago Sun-Times that it would only come to that “as a last resort.”

The other 1,000 new hires will be temporary substitute teachers. They may become members of the teachers union and receive some benefits, but their jobs run only through the current school year.

The temporary fill-ins and monitors are needed because as much as half of the permanent staffers at Chicago schools have reportedly asked principals to let them continue working from home in January, citing their fears over the Covid-19 pandemic.

Teachers union executive Stacy Davis Gates told the Chicago Sun-Times that such an arrangement will be “slightly less terrible than forcing teachers to engage in synchronous learning from unsafe buildings.” She called the district’s decision to fill the supervision gap with low-wage workers who are given no health care benefits amid the pandemic “particularly cynical.”

Davis Gates added that administrators should instead bargain with teachers to return to school buildings with enforceable safety standards and “real equity for black and brown school communities starved of equity for years before this pandemic.”

Chicago teachers went on strike for two weeks last year, forcing classes to be canceled for 11 days in the nation’s third-largest school system. Teachers said the walkout was driven by their “social justice” agenda, which included demands to increase support staff and reduce class sizes. Their new contract also included a 16 percent pay hike for teachers over five years, as well as a 40 percent increase for teaching assistants and other support staff. They had also demanded, but failed to get, more affordable housing.