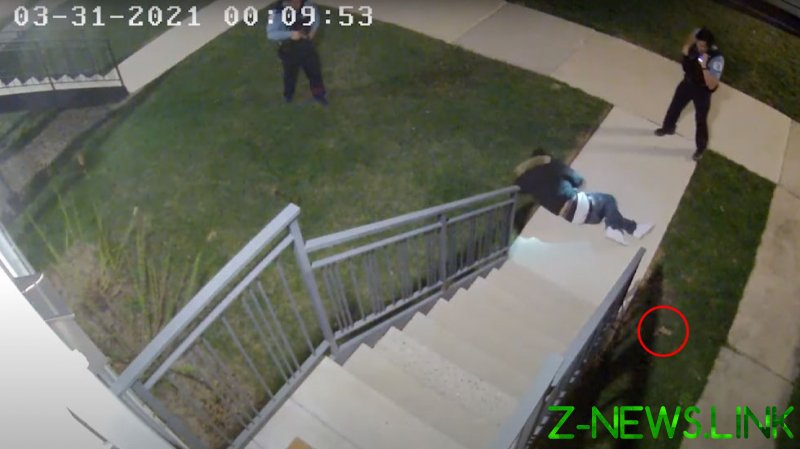 Footage released on Wednesday by the Civilian Office of Police Accountability (COPA) is stitched together from officer body cameras and commercial and residential security cameras, showing Alvarez running away when a police car turned on its lights at a gas station. He fled into a residential neighborhood, and officers chased him on foot, before firing five shots and hitting Alvarez multiple times.

An officer yells at Alvarez to “drop the gun” before firing. The stricken Alvarez drops his pistol but holds onto his cell phone, as one of the officers attempts to put a tourniquet on what seems to be a badly bleeding leg wound.

“Why are you shooting me?” Alvarez asks the police, to which one of the officers replies with what sounds like “You had a gun.”

COPA said tactical officers had attempted to stop Alvarez and speak with him, describing him as “an individual familiar to the officers.”

The incident happened on March 31 in the Portage Park neighborhood on the northwest side of Chicago – just two days after Adam Toledo, 13, was fatally shot after a foot chase. Toledo also had a gun, but dropped it behind a fence just before he was shot.

Footage does not show Alvarez pointing the gun at officers. He was pronounced dead at Illinois Masonic Medical Center, where he was taken for aid. The officer who fired the shots was placed on administrative lead, per standard procedure. COPA has identified him as 29-year-old Evan Solano, who has been with the Chicago police since June 2015.

Chicago Mayor Lori Lightfoot issued a joint statement with attorneys for Alvarez’s family, saying that publication of the video “will be the beginning of a long process of healing for the family, and for all those who knew and loved Anthony.”

Saying that both the city authorities and the family are “acutely aware of the range of emotions that will accompany the release of these materials,” the statement asked “those who wish to express themselves do so peacefully and with respect for our communities and the residents of Chicago.”

Hundreds of protesters marched through Chicago over Toledo’s shooting earlier this month, calling for Lightfoot’s resignation. At one point towards the end of the protest, a group of demonstrators scuffled with police in Logan Square Park.

Chicago PD has already launched a process of rewriting foot-chase policies after the Toledo shooting. However, the Illinois ACLU blasted the “current snail’s pace of reform” and said it was “not only costing the City lives, it is taking a psychological toll on communities of color.”

The biggest city in Illinois has a massive problem with gun violence and homicide. According to the Chicago Tribune, 185 people have been killed in Chicago so far this year – compared to 158 in all of 2020. Most of these murders are attributed to guns, while the vast majority of victims have been young black men.