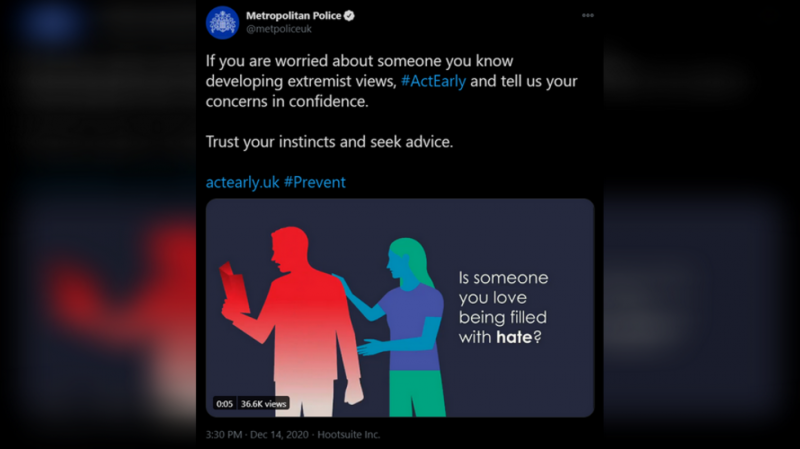 In a tweet, the police force encouraged Britons to tell them their concerns “in confidence” if they become worried about someone they know “developing extremist views.”

The message included a link to an counter-terrorism initiative called Act Early, which urges individuals to contact authorities if “someone close is expressing extreme views or hatred, which could lead to them harming themselves or others.”

According to the site, signs of “radicalisation” include “An obsessive or angry desire for change or ‘something to be done’” and “spending an increasing amount of time online and sharing extreme views on social media.”

People are encouraged to call a hotline to share their concerns with specially trained officers. “You won’t be wasting our time and you won’t ruin lives, but you might save them,” the website states.

The Met’s Twitter PSA was met with considerable suspicion. Several replies made reference to George Orwell’s ‘1984’ and compared London’s cops to a modern-day thought police.

“Anyone reading a book you don’t like, don’t stand for it, report them to the authorities for wrong think,” reads one of many disapproving comments.

“Your reputation is going the same way as the Gestapo, KGB & Stasi,” the ex-parliamentarian said.

But others were more playful with their criticism. Numerous Twitter users alerted the Met to “extremist views” being propagated by media outlets and UK politicians, including the BBC and London Mayor Sadiq Khan.

One particularly inventive “report” expressed concern about a ‘friend’, whose description bore a striking resemblance to Health Secretary Matt Hancock, being radicalised.

“I am worried [about] my mate Matt. He has recently developed some extreme views about people getting ill. He seems obsessed with cleanliness and stopping human interaction. I think he is planning a very harmful attack. DM for further details,” the tweet read.

The UK has seen a dramatic spike in the number of young people referred to the government’s counter-terrorism program. Sky News reported in November that a total of 682 children were referred to the program for potential far-right extremism in 2017-18 – a five-fold increase compared to data from 2014-15.

In recent months, UK authorities have stepped up efforts to monitor and even police online content, leading to criticism that such policies criminalise unpopular or offensive viewpoints or beliefs.

However, the push to crack down on online “extremism” coincides with growing concerns about terrorist threats in the UK and across Europe. A former al-Qaeda bombmaker turned MI6 agent warned early this month that extremists from northern Syria and Libya will try to attack the UK, France, and Germany around the Christmas holidays. In many cases, terrorists who have targeted Europe in the past were already on the radar of intelligence services before they carried out their attacks.