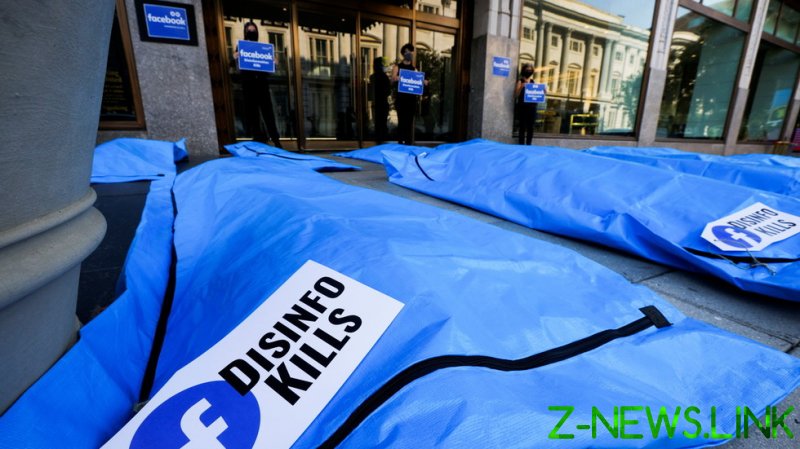 Blue body bags lined the curb outside Facebook’s office in Washington, DC on Wednesday, each bearing a sticker depicting Facebook’s ‘thumbs-up’ logo and the text “disinfo kills.” The protest was staged by a group calling itself The Real Facebook Oversight Board (RFOB), which was launched in response to Facebook establishing a supposedly neutral “oversight board” in 2018 to guide the company’s content moderation and censorship policies.

Staffed by journalists, left-wing activists, and censorship advocates like the Anti-Defamation League’s Jonathan Greenblatt, the RFOB wants Facebook to be even more aggressive in tackling what it calls “disinformation” and “the immediate risk to US democracy.”

The protest on Wednesday coincided with the the RFOB’s release of a report demanding Facebook disable post engagement on content from “proven disinformation superspreaders” – 12 accounts that The Center for Countering Digital Hate, another activist group, claims are behind nearly two-thirds of all anti-vaccine content on the platform. The Biden administration has also cited these same 12 accounts and to colluding with Facebook to have their posts censored.

The report concluded with several pages of analysis by Media Matters, a left-wing activist group, calling for further censorship of pro-Donald Trump posts and videos on Facebook.

Nevertheless, the company reckons the RFOB is asking too much, and spokesman Andy Stone accused the body bag protesters of engaging in “cheap stunts.”