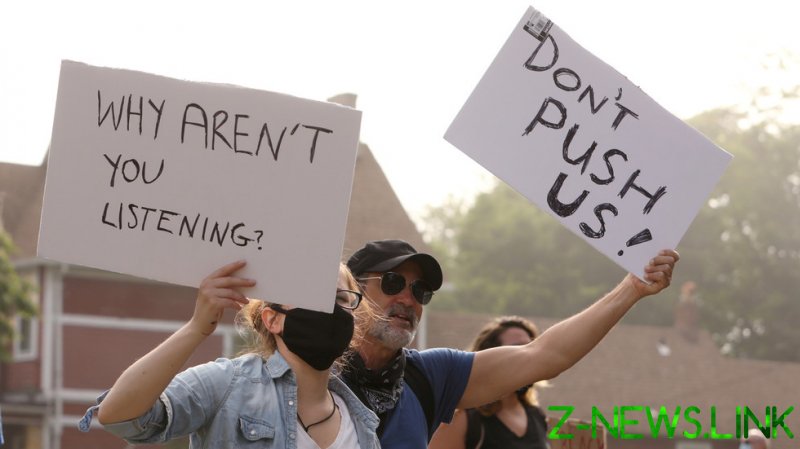 The Buffalo Police Benevolent Association was “extremely pleased” that a grand jury decided to dismiss the charges, adding that McCabe and Torgalski “were simply following departmental procedures and the directives of their superiors to clear Niagara Square despite working under extremely challenging circumstances,” according to a statement quoted by WGRZ-TV.

The two officers were charged in early June 2020, after a video emerged of them confronting the 75-year-old Martin Gugino and pushing him away. Gugino, a social justice activist well known in the community, struck the pavement with his head and suffered a skull fracture, spending several days in the hospital.

As video of the incident made rounds on social media, New York Governor Andrew Cuomo denounced their behavior as “wholly unjustified and utterly disgraceful” and demanded their firing. There was tremendous public pressure on the police, in the light of Black Lives Matter protests spreading across the US in the wake of Floyd’s death in Minneapolis, Minnesota the week prior.

Members of the Buffalo PD’s Emergency Response Team reacted to the charging of their colleagues as well, however. All 57 of them resigned from the unit, while staying on with the department.

In an ironic twist, Cuomo’s Covid-19 lockdown prevented the grand jury from convening to investigate the charges for months, and once it was able to meet, Flynn said he had “higher priority cases” to handle.

The two officers are “still suspended pending the conclusion of the internal investigation,” according to a city spokesperson. It is unclear whether they will be reinstated or let go.