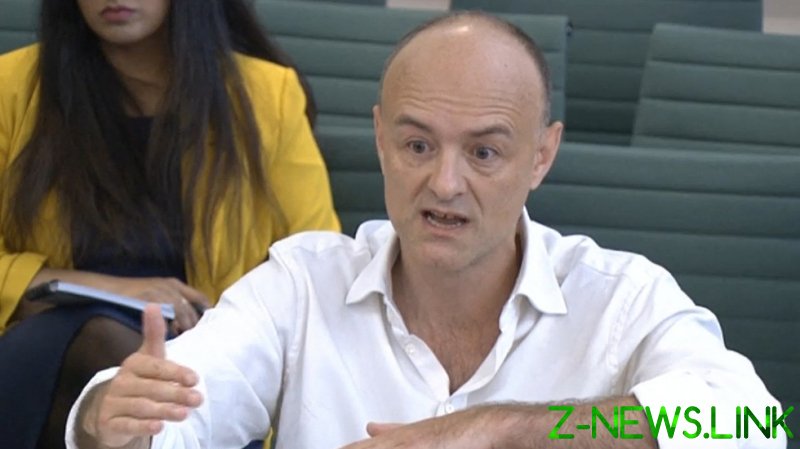 If Dominic Cummings has achieved anything in British politics, then it is using his appearance before a usually dull-as-ditchwater Parliamentary select committee to make it nearly eight hours of must-watch television as he lobbed grenade after grenade into the Downing Street bunker of his former boss, PM Boris Johnson.

Admitting his own mistakes in the very first sentence of his marathon testimony before MPs, Cummings concluded almost eight hours later by acknowledging, “There are many thousands of people in this country who could have done my job better than me.”

A show of humility is always welcome at these public events but if he was to go down, he was not doing so alone.

His explosive revelations of the chaos, indecision, deceit and self-interest at play at the heart of the British government were shocking and pre-empt any official inquiry that might take place by putting down a marker on what really went on in government during its disastrous handling of the Covid-19 outbreak.

Cummings told of a media-obsessed PM’s struggle to recognise the seriousness of the coronavirus pandemic from day one and was convinced, even as recently as last February when the World Health Organisation had already raised the alarm, that the virus was simply a “scare story” and no more threatening than swine flu.

Addressing earlier claims that Johnson had missed five key Cobra meetings at the outset of the pandemic, Cummings explained that as BoJo wouldn’t take the threat of the virus seriously there was no point in having him chair the meetings about how to deal with it.

Cummings repeatedly told the committee that “tens of thousands of people died who didn’t need to die” thanks to the indecision and incompetence of those in charge including the PM and Health Secretary Matt Hancock.

He said he told Johnson, “if we don’t fire the Secretary of State (Hancock) and we don’t get the testing in someone else’s hands, we are going to kill people and it will be a catastrophe”.

But that wasn’t all. He added, “I think that the secretary of state for health should have been fired for at least 15 to 20 things, including lying to everybody on multiple occasions, in the meeting, after the meeting, in the Cabinet Room and publicly.”

Cummings told the PM to remove Hancock. “I said ‘sack him’ every week, sometimes I said it every day.” Not. A. Fan.

It was brutal stuff and makes Hancock’s appearance before the same committee in a fortnight a mouthwatering prospect.

But the PM and his health secretary had company on the Cummings hitlist.

On one surreal day in March last year, while Cummings struggled to engage the PM with the very real possibility that the UK faced up to 500,000 worst-case-scenario deaths unless an immediate lockdown was imposed, elsewhere US President Donald Trump was attempting to convince BoJo to join him in a Middle East bombing campaign while Carrie Symonds, the PM’s girlfriend, was going “completely crackers” insisting key staff devote valuable time to rebut a particularly “trivial” newspaper story about her dog, Dilyn.

Newspapers had reported the poor mutt was to be re-housed from Downing Street and she was furious.

As Cummings explained, “So we had this sort of completely insane situation in which part of the building was saying we’re going to bomb Iraq; the prime minister’s girlfriend was going completely crackers about this story and demanding that the press office deal with that.”

He told the committee that Symonds also meddled in hirings and that she was “trying to change a whole bunch of different appointments at No. 10 and appoint her friends to particular jobs”.

The former adviser said, “In particular she was trying to overturn the outcome of an official process about hiring for a particular job, in a way which was not only completely unethical, but was also clearly illegal.”

Cummings made clear that the lack of authority, an absence of responsibility and ensuing chaos were hallmarks of what passes for the UK government and despite his attempts to make his boss sit up and take notice, the PM struggled to do so, and did, as rumoured and as Cummings confirmed, indeed declare that he would “let the bodies pile high” before announcing the October 31 lockdown.

The PM has denied ever uttering those damning words but there seems to be a growing number of people who agree on hearing the same thing.

So catastrophic was the government’s coronavirus handling it’s no surprise that Cummings suggested a more rigorous approach to dealing with a pandemic should another ever come our way. He suggested that if such a thing happened again then it would be best for everyone to install a dictator.

“You’d have had a kind of dictator in charge of this,” Cummings said, suggesting Cambridge physicist Mark Warner, who he holds in high esteem.

“If I’d been prime minister I’d have said, ‘Mark Warner is in charge of this whole thing, he speaks with my authority,’ he has as close to kingly authority as the state has legally to do stuff, and he is pushing the barriers of legality, he is in charge of everybody, he can fire anybody and he can move anybody and he can jiggle the whole thing around.”

At least this would avoid the chaos to which Cummings displays a keen aversion. He is a man who likes a plan. The problem with having plans in government is that you also need the power to implement them, otherwise they go nowhere.

The plan in this case was to restore some sort of order to the way in which the coronavirus pandemic was being handled, or else who knows how many people would die without a clear approach on PPE, ICU ventilators, vaccines, lockdowns and the myriad other aspects of dealing with a global health emergency.

But the PM is not the person to do that, and problematically, he is reluctant to seek help. In one chilling exchange, Cummings said BoJo told him, “You’re right, I am more frightened of you having the power to stop the chaos than I am of the chaos. Chaos isn’t that bad. Chaos means that everyone has to look to me to see who’s in charge.”

I cannot be the only person to find this more than a little disturbing.

It also explains why, when asked by one of his inquisitors, “Do you think Boris Johnson is a fit and proper person to get us through this pandemic?” Dominic Cummings didn’t even take a breath before replying, “No”.