Home / WORLD / ‘Chaos was inevitable!’ Biden shrugs off shock scenes of Afghans falling from US plane because ‘that was five days ago’

‘Chaos was inevitable!’ Biden shrugs off shock scenes of Afghans falling from US plane because ‘that was five days ago’ 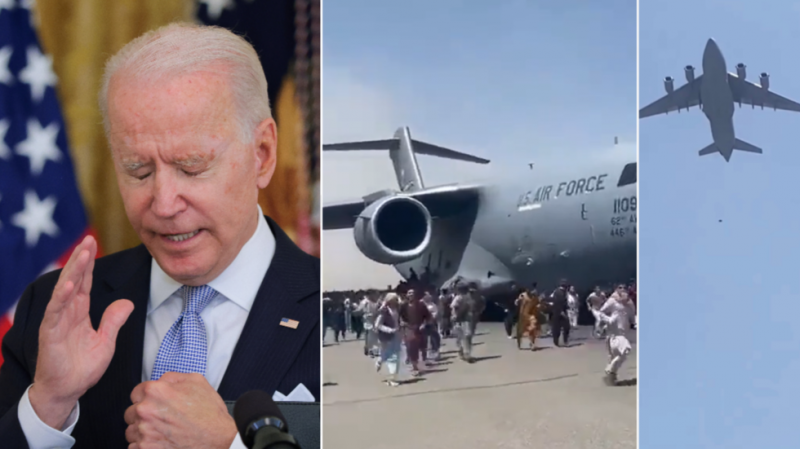 Biden was in Camp David over the weekend when the US-backed Afghan government collapsed and the Taliban took over. He returned to Washington on Monday to give a speech, after harrowing videos of Afghans mobbing US transport planes and reportedly falling to their deaths began making rounds. He took no questions from the press, however.

“That was four days ago, five days ago!” Biden told George Stephanopoulos – a former adviser to President Bill Clinton, now anchor at ABC – in an interview recorded Wednesday and scheduled to air Thursday morning.

There have been no more pictures of desperate Afghans mobbing evacuation planes since, mainly because several thousand US troops were sent to prevent anyone from entering the Hamid Karzai International Airport (HKIA) without proper documents. The Taliban has also set up checkpoints outside the airfield.

In the ABC interview, Biden repeated some of his talking points from Monday, insisting that US intelligence did not foresee the Afghan National Army collapsing more or less without a fight in a matter of days.

“Look, it was a simple choice, George,” he said. “When you had the government of Afghanistan, the leader of that government, get in a plane and taking off and going to another country; when you saw the significant collapse of the Afghan troops we had trained, up to 300,000 of them, just leaving their equipment and taking off – that was, you know, I’m not, that’s what happened. That’s simply what happened.”

Asked if the whole process could have been handled any better, Biden said no.

“I don’t think it could have been handled in a way that, we’re gonna go back in hindsight and look – but the idea that somehow, there’s a way to have gotten out without chaos ensuing, I don’t know how that happens,” Biden said.

After initially agreeing with Stephanopoulos that the chaos was always “priced into” the decision to withdraw, Biden backtracked.

“Look, one of the things we didn’t know is what the Taliban would do in terms of trying to keep people from getting out. What they would do. What are they doing now? They’re cooperating, letting American citizens get out, American personnel get out, embassies get out, et cetera,” he said, before admitting the US was “having some more difficulty having those who helped us when we were in there,” meaning the Afghan translators, contractors and their families.

Some have estimated their number to be as high as 80,000, but Biden told ABC that the actual number the US was willing to take was around 60,000. The US has been able to evacuate around 3,200 people so far, with the ambitious goal of increasing that to 9,000 or more per day.

An estimated 10,000 Americans may still be in Afghanistan, and Biden vowed to keep a military presence at the Kabul airport until everyone who wishes to leave can do so – even if that means going past his August 31 deadline for leaving the country.

At one point, according to ABC transcripts of the interview, Biden credited his predecessor Donald Trump for negotiating a deal with the Taliban for the lack of attacks on US troops in Afghanistan.

“I hear people say, well you had 2,500 folks in there and nothing was happening. You know, there wasn’t any more – but guess what, the fact was, that the reason that wasn’t happening, was the last president negotiated a year earlier that he’d be out by May 1st and that in return, there’d be no attack on American forces. That’s what was done. That’s why nothing was happening,” Biden said.

Biden’s Monday speech did not address how the withdrawal was going, but tried to answer the question whether the US should be leaving in the first place. Trump himself called it out, saying in a statement that the problem was not in leaving Afghanistan but the “grossly incompetent way we left!”

The current president “should have gotten the civilians out first,” Trump told Fox News’ Sean Hannity on Tuesday. “Then he should have taken the military equipment, because we have billions of dollars a brand-new beautiful equipment. Take the equipment out, and then take the soldiers out.”