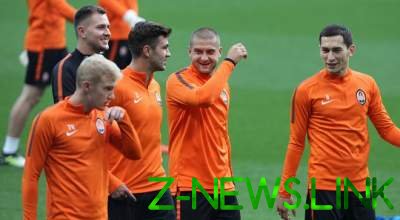 Champion of Ukraine Shakhtar in England will play their second match of the group stage of the Champions League.

After a home win over Napoli, Shakhtar were involved in the fight for the playoffs of the Champions League. The second exam for the Europa League according to the team, Paulo Fonseca will be even more difficult – the Pitmen arrived at the lair of the Manchester city team that bookmakers safely include in top five favorites of the Champions League.

Manchester city this season destroys everything in its path: the bulls have won their last six matches with a total score of 24:2, and in each game the team of Josep Guardiola shows intimidating for opponents efficiency (19.7 per shot on average per game, 64,7% of possession and 88.6% of precision gears).

For the match in Manchester Shakhtar suitable status as the undisputed underdog. Here the doping of Darijo Srna, and never missing problem in defence, and a low percentage of their scoring chances. It is possible not to pay attention in matches with “Star” or “the Carpathians”, where the footballers of “Shakhtar” at the expense of the class still take their toll, but with Manchester city, it will not work. Suffice it to say that the composition of the British version of “Transfermarket” five times more expensive “miner”.

Manchester city at the end of the week in the Premier League will play with “Chelsea”, which gives reason to assume that today Guardiola will try to take victory in
economical mode. The Spaniard almost two equal-ended, allowing it no problem to fight on several fronts. Shakhtar have no such luxury, even for a few weeks before the match, everything is perfectly clear, someone will come in based on a match of the Champions League.