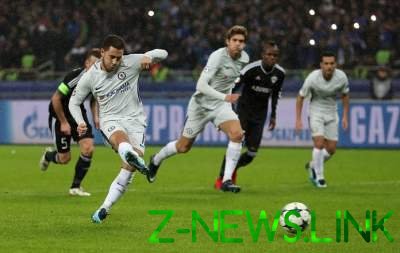 In the group after the fifth round decided one participant in the playoffs of the Champions League.

Chelsea have ruined a festival of football in Azerbaijan, having shipped to gate of local “Karabakh” four unanswered goals. In this match everything was clear already in the 19th minute when Willian earned a penalty and a red card for the captain Sadygov.

The ex-midfielder “Shakhtar” tonight was the best on the field – Willian scored a brace and brought his club a place in the 1/8 finals.

Atlético after two misfires with “Karabakh” to preserve the chances for the playoffs had in Madrid to beat Roma. The Diego Simeone’s side have coped with this task – a goal-handsome Antoine Griezmann and his assist for Kevin Gameiro has kept the “Plans” in the game.

However, the chances of Atletico to qualify from the group still close to zero – the Spaniards have not only beat Chelsea, but is hoping for the failure of “Roma” in the home match against “Karabakh”.