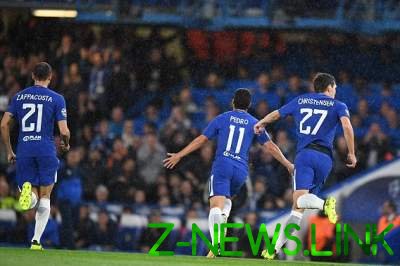 Champion of England “Chelsea” after the first round single-handedly led the group C.

The meeting of the strongest clubs in England and Azerbaijan ended in predictable defeat Qarabag. A return to the Champions League the Chelsea players celebrated six unanswered goals, and Zappacosta and Bakayoko scored his first international goal in the shirt “the Aristocrats”.

It is worth noting that the first match of the group stage of the Champions League the team of Antonio Conte played polarisierung composition, after Sunday Chelsea will be a big Premier League match against Arsenal.

Atlético failed to translate into goals the advantage in the away match with Roma. 90 minutes of “Plans” struck at goal 21 goal but were unable to penetrate gorgeous Alisson, who made 10 saves.
The climax of the match came in the second minute of stoppage time when soul from two metres has punched above gate unprotected.