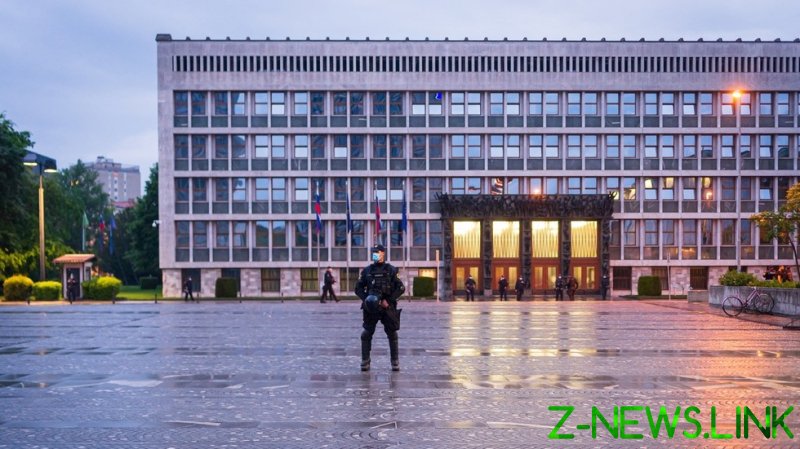 The one-man protest occurred outside the National Assembly building in Ljubljana shortly after 7pm. Carrying a chainsaw, and with his small dog on a leash, the suspect reportedly hollered, “I’ve had enough of this closure!” in an apparent reference to his country’s anti-coronavirus restrictions.

A video of the bizarre spectacle was posted to social media. A security guard can be seen tackling the man, while another rushes up to retrieve the chainsaw, which has been dropped on the ground, and turns it off. The man is then pulled to his feet by police, who search and cuff him. The small dog, still on its leash, barks furiously during the entire episode, but doesn’t attempt to attack the guards.

Local media citing the Ljubljana police reported that the alleged offender was taken into custody without incident and no one was injured. The matter is still being investigated.

While anti-lockdown protests have become common in countries around the world, this might well be the first impromptu demonstration featuring a chainsaw.

Slovenia is set to enter a new lockdown on April 1, which will see schools and non-essential businesses closed for 11 days. The restrictions also place limitations on citizens’ movement and ban all gatherings. Strict measures are also in place closely regulating travel in and out of the country.